Tweet
The country’s political capital is also its cultural and historical one.
By: Melissa Lorraine Chua

Unlike the more bustling cosmopolis located further down south, the capital city of Hanoi holds a quieter and more restrained charm – its colonial architecture and wealth of religious and political history offer great touring, while its close proximity to the UNESCO World Heritage Ha Long Bay makes for another great reason to visit. If you’ve ever been to Ho Chi Minh City, it will soon become apparent that the people of Hanoi are a much more conservative breed than their southern counterparts. The communist symbol is still flown loud and proud outside many establishments, while the tourist traps are less aggressive and seem to take on an almost sheepish vibe.

The locals may not be particularly friendly, but they are never outwardly disrespectful; expect someone to cut your queue once in a while if you’re eating at a popular streetside stall, but don’t be afraid to ask for directions if you feel you’ve made the wrong turn. As most of the Vietnamese language is in Latin script, locals can understand where you want to go – just make sure you have it written down. 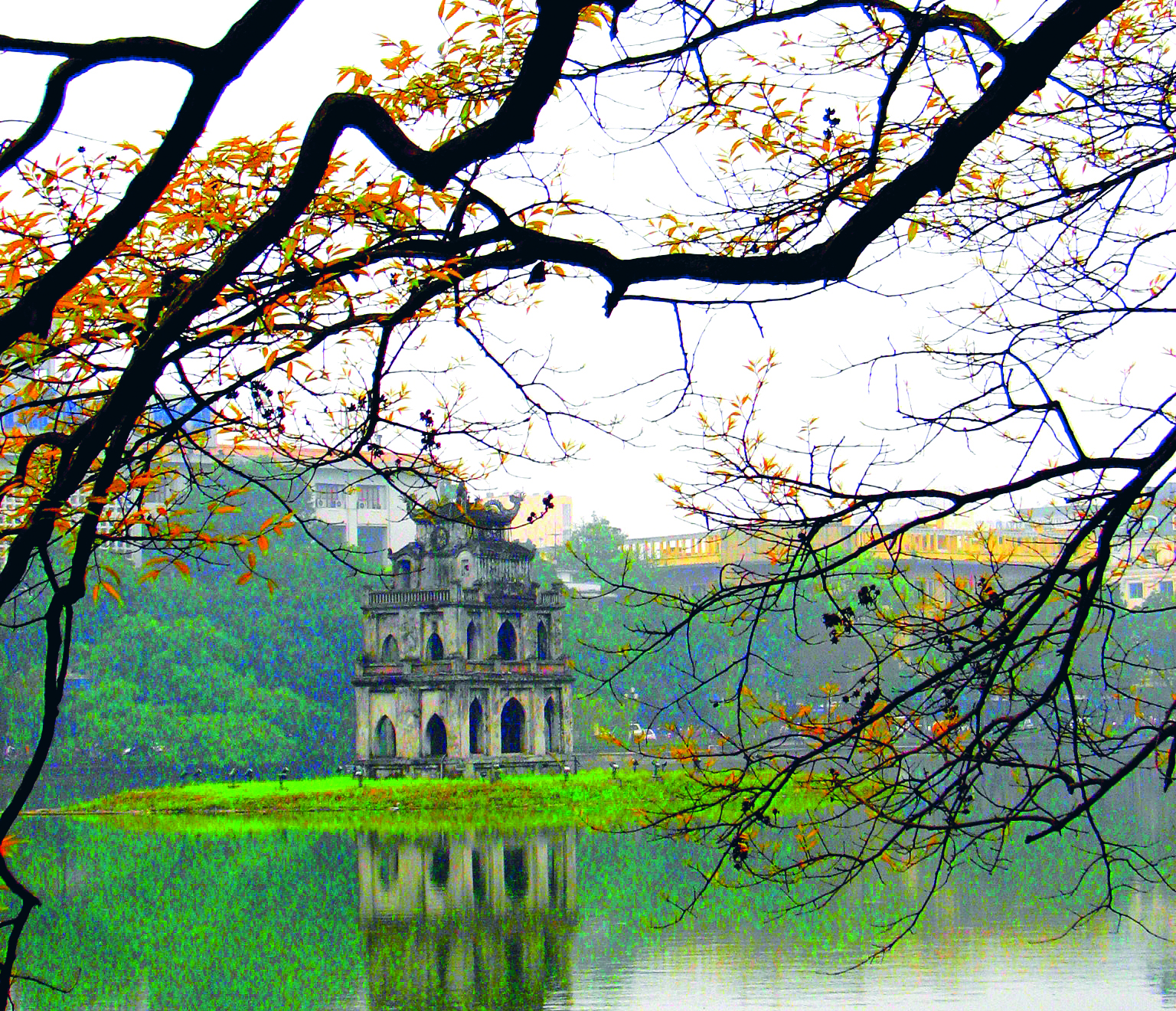 It seems in every city there is some form of a local watering hole, a lake or a river that has taken centre stage in the city’s social and historical scene. For Hanoi, that watering hole is Hoan Kiem Lake. Located in the historical centre of the city, its name, meaning “Lake of the Returned Sword”, was inspired by a local legend about a Golden Turtle God who appeared to then emperor Le Loi to reclaim his magical sword, a gift from the Dragon King that aided the emperor in his revolt against the Chinese Ming Dynasty. The Turtle Tower (Thap Rùa) that stands on a small island in the middle of the lake is linked to this legend, while large softshell turtles have been sighted in the lake for years (dubbed R. leloii after the emperor).

A stroll around the lake will also take you to the Thang Long Water Puppet Theatre (57B Dinh Tien Hoang Street) located near its northeast corner. There, visitors from all over the world come to watch the cultural art of water puppetry; this traditional art has been made more modern with the use of lights and music, but the entertainment value remains ever the same, charming audiences with scenes from the daily life of a Vietnamese farmer to enactments of historical legends.

Walk south towards Trang Tien Street and you will see the iconic Opera House, one of the great architectural landmarks of Hanoi. It was built in 1901 and was modelled after the Palais Garnier, the older of Paris’ two opera houses, and has been the centre of the city’s political and arts scene for decades. Right next door is the National Museum of Vietnamese History, one of the more interesting museums in town and definitely worth a visit. There is a massive sculpture of the Goddess of Mercy that has 1,000 eyes and arms, as well as a comprehensive display of the 13 Nguyen dynasty emperors’ ornamented throne, dresses and other antiquities.

Slightly down the road is Swing Lounge (21 Trang Tien Street), where you can catch more contemporary live performances. This classy joint alternates between cabaret style performances of international hits to lesser-known cover acts belting out some Vietnamese pop. Come for the great music but stay for the infectious energy. Do note, however, that nightlife establishments in Hanoi close by midnight, so you’ll find the streets empty relatively early. 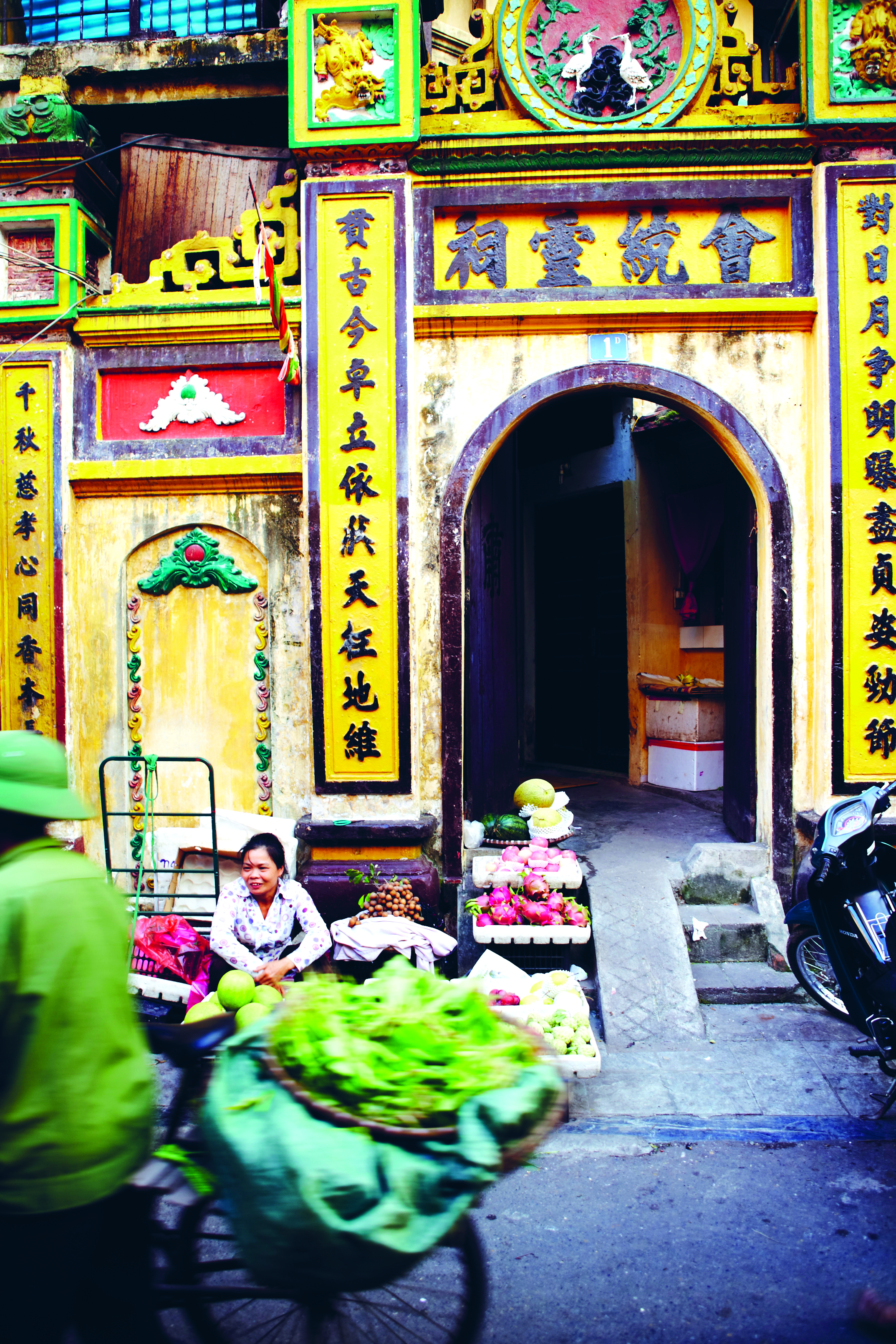 Take a stroll around Hanoi’s Old Quarter and you’ll find yourself immersed for hours – there are endless rows of quaint shops selling a variety of vintage finds, interior furnishings, local tailors (if you have the time and find yourself along Hang Gai Street, be sure to get fitted for an ao dai, the traditional Vietnamese dress), and random contemporary cafes serving the country’s world-renowned coffee.

Venture further up northeast for a plethora of historical attractions, one of which is the Presidential Palace in the Ba Dinh District. Once occupied by the French government and overtaken by the Communist Party of Vietnam after independence, the palace itself remains off-limits, but the expansive garden and pond near the rear is a good place for a photo opportunity. Ho Chi Minh built a stilt house adjacent to the palace – it is claimed that he refused to live in the palace itself for symbolic reasons – where he lived and worked from 1958 till his death in 1969. Within walking distance from the Presidential Palace are the Ho Chi Minh Mausoleum, Ba Dinh Square where Ho Chi Minh’s tomb is located, and the One Pillar Pagoda with its unique construction and design meant to emulate a lotus blossom jutting out from the water.

Right in the heart of Old Quarter is the quaint little Bach Ma Temple (76 Hang Buom Street), said to be the oldest in the city; it was constructed in 1010 by the emperor Ly Thai To to honour a white horse that guided him to this site, where he eventually decided to construct his city’s walls. Through the old wooden doors, a vibrant red-lacquered funeral palanquin and gilded alter pay homage to Confucius – his shrine was added in in 1839. 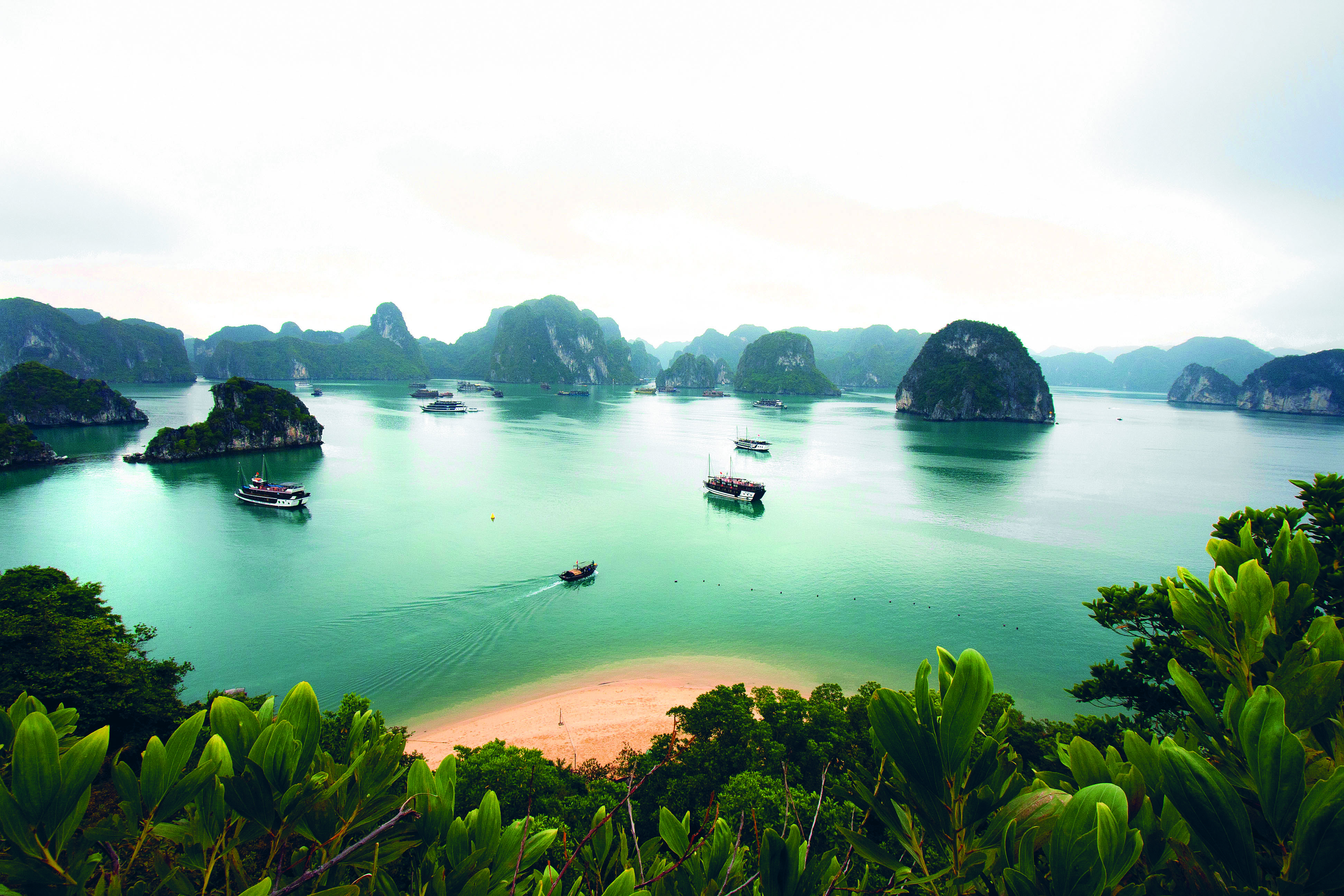 A first-time visit to Hanoi would seem incomplete without a trip to the UNESCO World Heritage Site of Ha Long Bay. Luckily,

Paradise Cruises (www.paradisevietnam. com) is one of the best in the country – they literally shuttle you straight to your vessel. Pick-up starts bright and early in the morning at 7.30 am, so grab a hearty breakfast. Pho Bat Dan (49 Bat Dan Street) is a little hole in the wall place that’s still relatively undiscovered by tourists, and the beef broth is absolutely heavenly, the bowl filled to the brim with silky noodles and chockfull of brisket and fresh beef slices. The locals know to come early because the pho here is till stocks run out.

Exploring Ha Long Bay is unlike any other type of cruise – watching the monolithic limestone karsts float by as you enjoy the sunset with a drink in hand is one of the most serene experiences one can have. Most cruises will make a stop at Titop Island, where you can climb the steps to the top of the observation deck for a panoramic view of the surrounds. Luon Cave is another popular stop, where you can kayak on your own or take a bamboo boat rowed by the locals, or explore the beautiful Sung Sot Cave, one of the largest in Ha Long Bay.

Cruise itineraries range from the basic day trip to the extended 3D2N tour. Since it’s a five-hour drive from Hanoi to the set-off point of Tuan Chau Island, we recommend extending your cruise experience to get the most out of your visit. Longer itineraries can take you as far as Vung Ha Island, one of the more unspoilt islands in the bay that is less frequently visited by tourists. Here you can go trekking or kayaking in its pristine waters, or enjoy a quite swim by the beach.

Returning to Hanoi after a cruise will usually leave you with a few more hours to explore the city before nightfall. Dinner options abound – Bahn Mee Resturant (18 Au Trieu Street) next to the St Joseph Cathedral is tourist-friendly with Englishspeaking staff, while Quán Nem (117 Bui Thi Xuan Street) serves killer fried crab spring rolls that are stuffed with generous amounts of crab meat. Another popular choice would be Bun Cha, and there are numerous stalls in the Old Quarter selling this iconic Hanoi dish of charred grilled pork slices and patties steeped in an oily broth and eaten with a marinated fish sauce. One of the most popular is Dac Kim Bun Cha along Hang Manh Street, hidden in a small alleyway and marked only by a red sign.

Perfectly preserved, the Sofitel Legend Metropole Hanoi (15 Ngo Quyen Street) is one of the last vestiges of colonial French architecture in the city, replete with classical white façade, green shutters, original wrought iron accents and detailed wood panelling. Originally built in 1901 by two private French investors, the hotel quickly became the premier rendezvous for society’s elite during the first half of the century. The grounds also played a significant role during and after the war years – it was the official hotel for visiting VIPs and became a base for press and diplomats following the country’s independence in the 1950s. Be sure to take the guest-exclusive Path of History Tour of the hotel that will detail its illustrious pass, and which includes a visit to the bomb shelter that resides beneath the hotel’s Bamboo Bar. 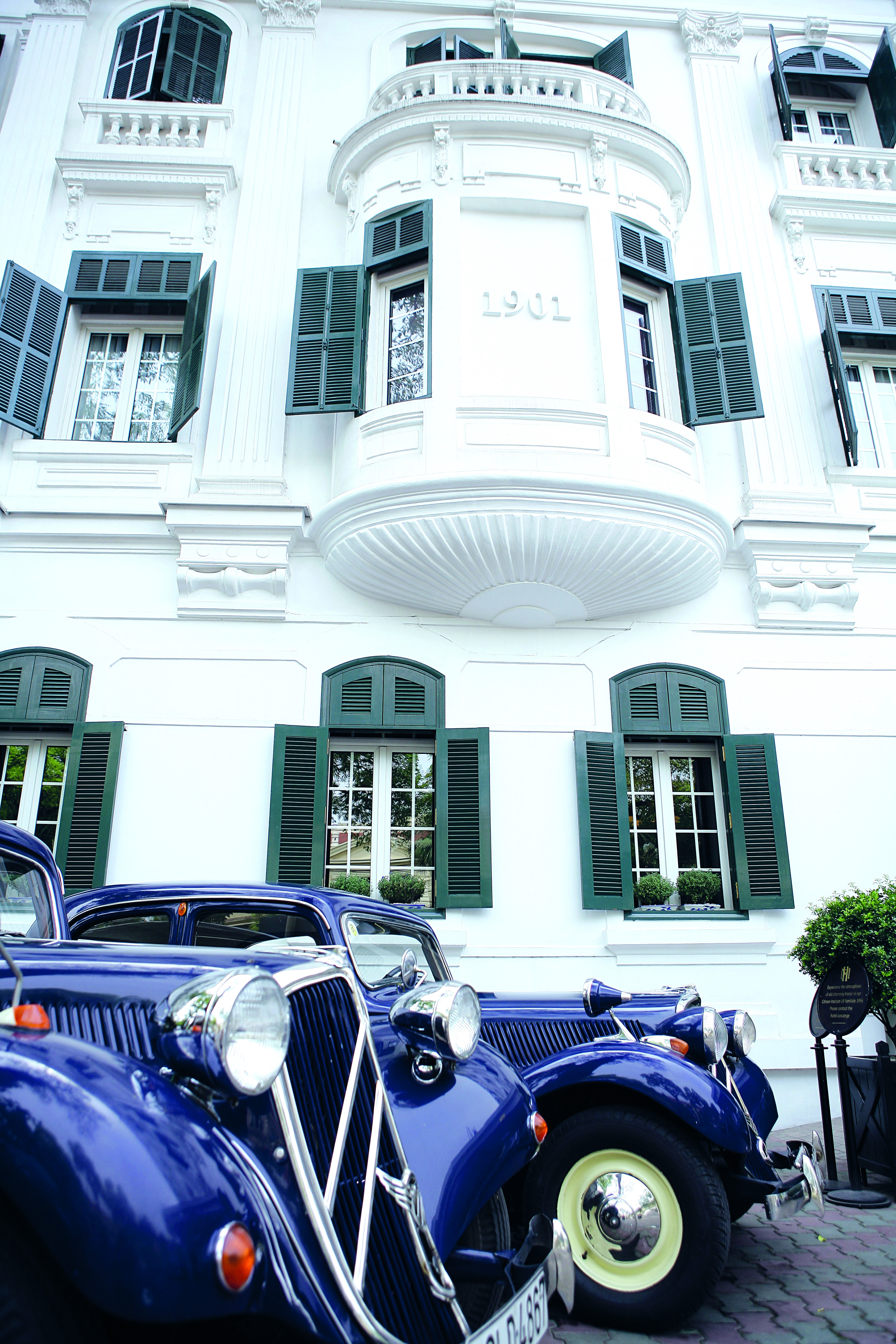 Apricot Hotel (136 Hang Trong Street), perched on the edge of the Old Quarter and right across from Hoan Kiem Lake, is one of the newest luxury establishments in town. Opened by the same owners as Apricot Gallery, the stylish hotel is bedecked in local artworks, ranging from the small paintings that adorn the corridors, to the massive sculptures that from the lobby’s centrepiece. 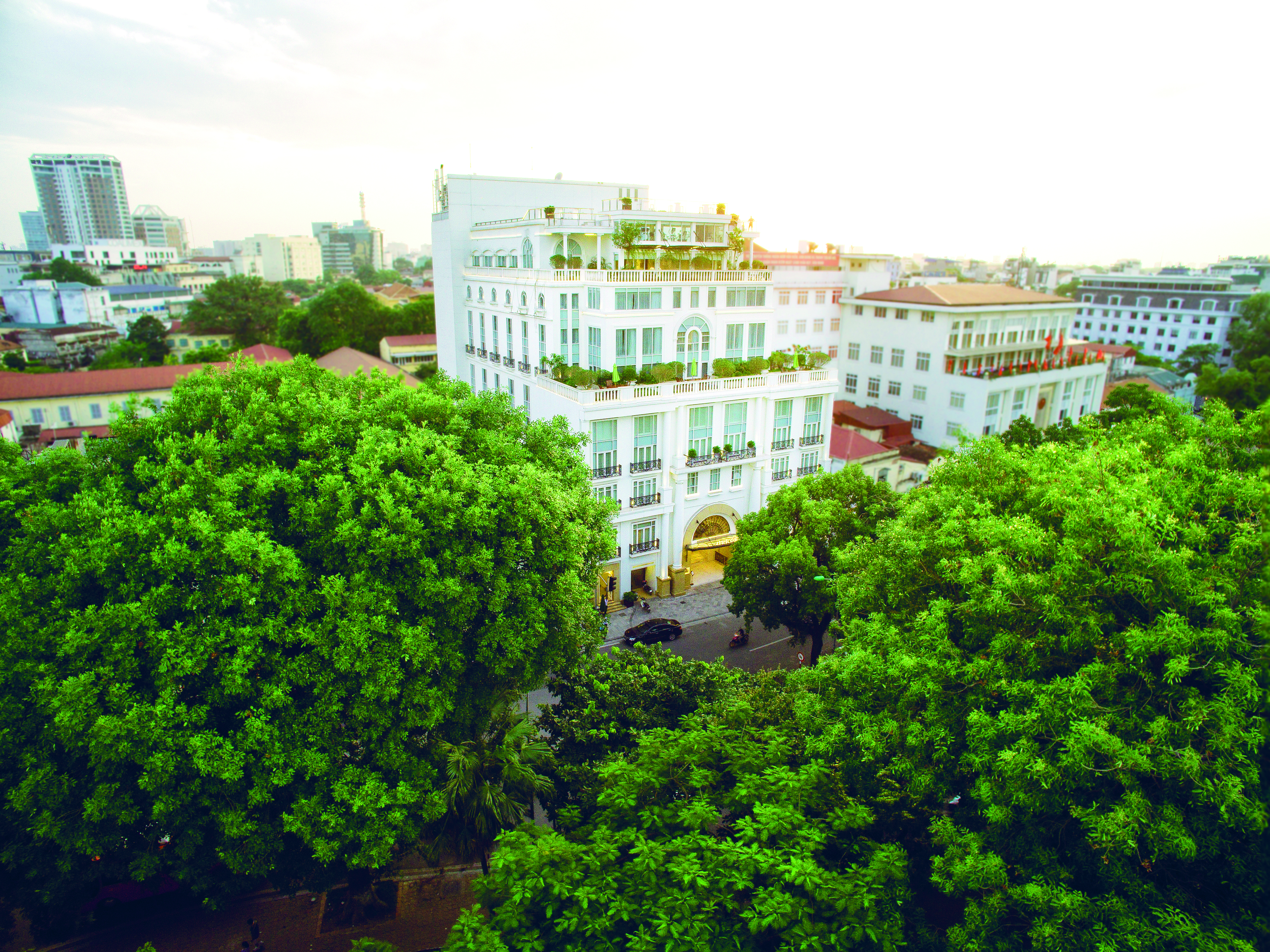 Cha Ca La Vong (14 Cha Ca Street), one of the oldest restaurants of its kind in the city, sells only one dish – a skillet of fish served atop a charcoal burner, drenched in olive oil and seasoned with turmeric, dill, fish sauce, and a combination of other fresh herbs. Don’t expect any elaborate service here; once you climb the rickety staircase through the non-descript entrance, you’ll find yourself crammed into communal tables with servers that are brusque but efficient. A common accompaniment to most meals is bun (pronounced “boon”), Hanoi’s version of rice vermicelli that is thicker and stickier than the ones more commonly found throughout Southeast Asia. 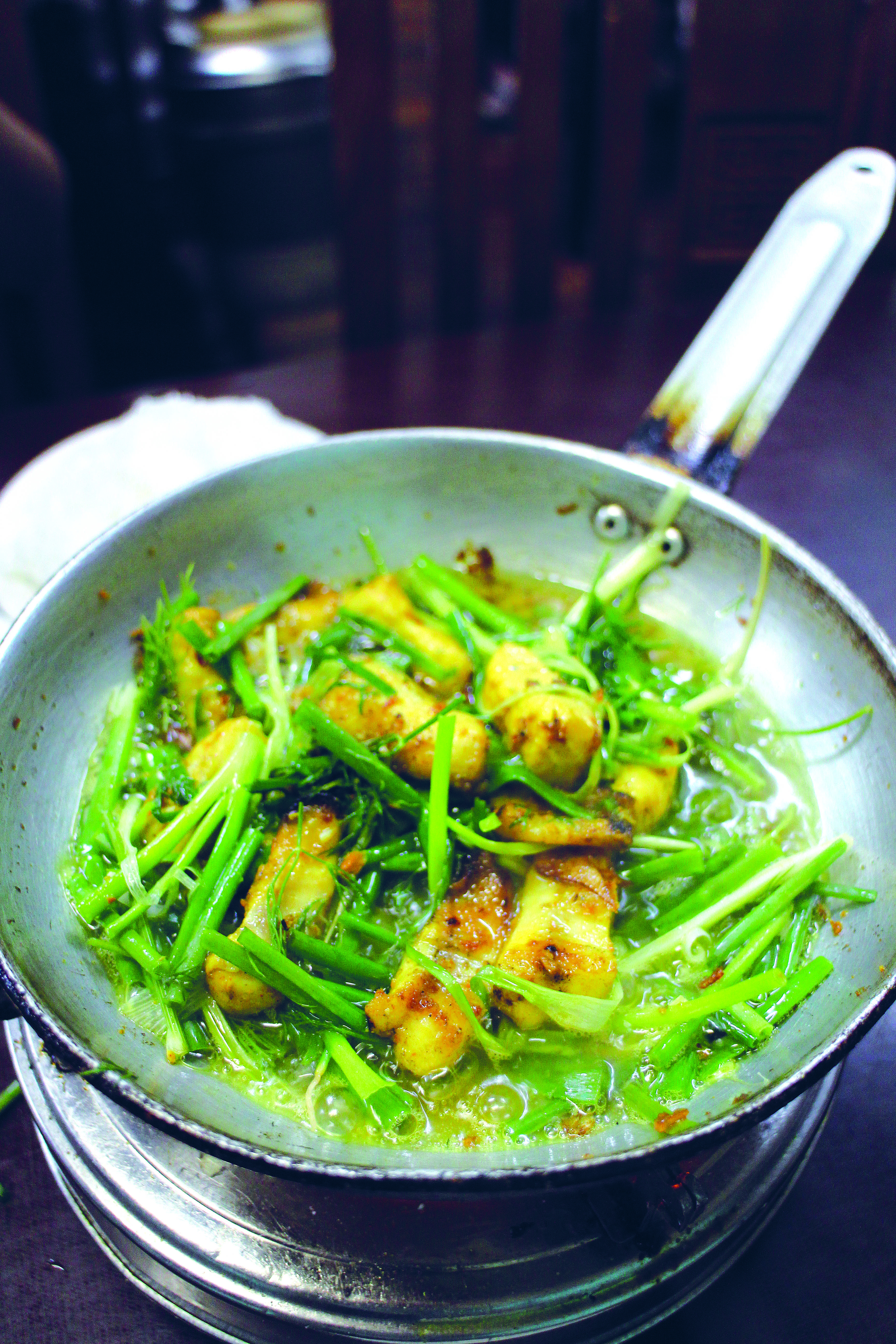 If you’re celebrating a special occasion in Hanoi, Halia at Westlake, Hanoi (29 Xuan Dieu, Tay Ho District) is a Singapore export that is doing exceptionally well in this part of the region – it’s won a slew of accolades since its inception in 2008, including being named Asia’s Top 500 Finest Restaurants and Vietnam’s Top Restaurant by the Miele Guide. Signatures include the Shrimp Satay Salad with delicate ginger flower dressing and pops of pomelo, as well as the Singapore-style Chilli Crab Spaghetti with sweet and spicy crabmeat sauce. Round the meal off on a sweet note with the Ginger Nougat Parfait that comes with roasted honey pineapple and a spiced caramel sauce. 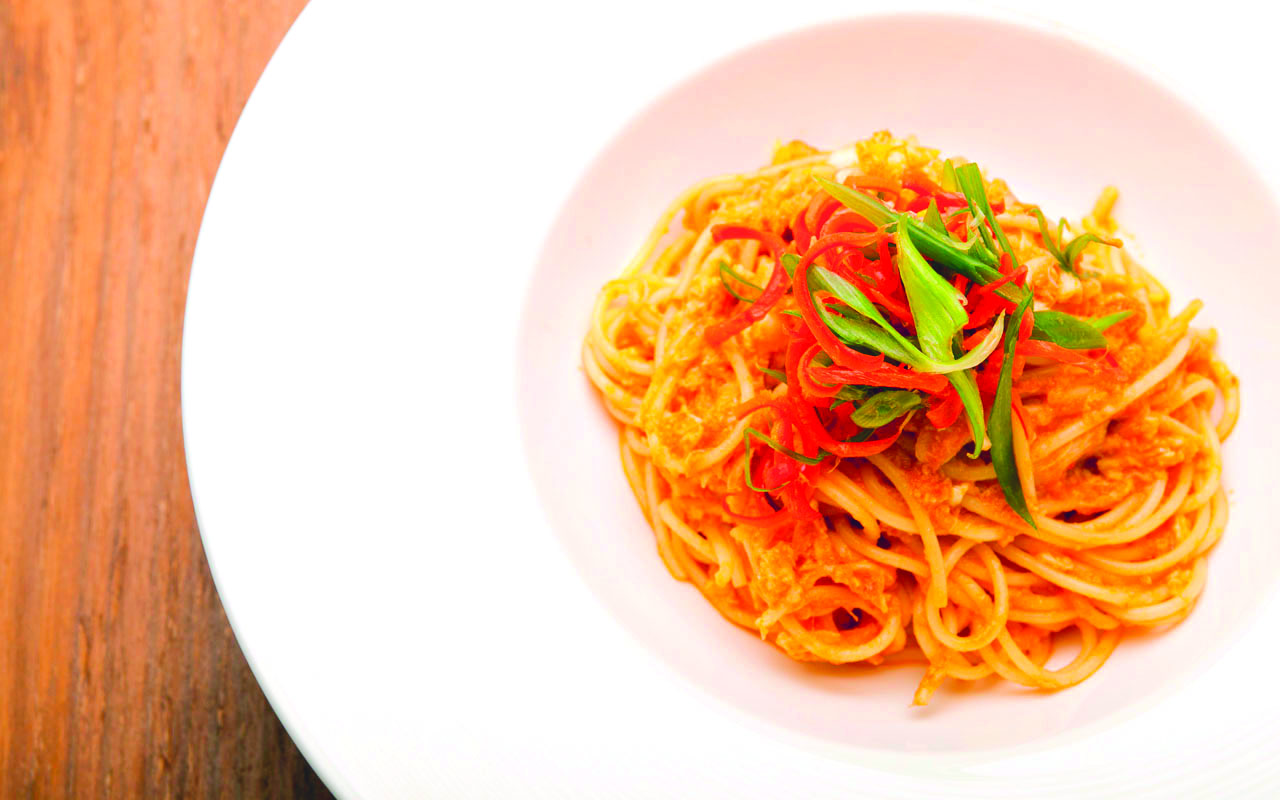