A Journey to West Japan

Tweet
Come sample the rich history and culture of the charismatic Kansai region.
By: Vanessa

Home to the past capitals of Japan, bustling cities and magnificent coastlines, it is no wonder that many are captivated by the beauty and charm of the Kansai Region. Teeming with history and culture, its cities, towns and people are truly the heart of Japan. Once the religious, cultural and political hub of the country, the region now balances a mix of urban city life and a peace rooted in spiritual significance. Kansai, literally translating to “west of the border”, lies in the western regions of Japan’s main island, Honshu. Getting there is easy. There are multiple flights to and from Kansai Airport, which provides a good starting point for trips. The best ways to explore the region would be to rent a car or purchase a JR train pass. Toyota rent a car provides drivers with bookings before arrival as well as an introductory guide to Japan and its road systems and etiquette. For those looking to travel on the trains, the Japan Railway Kansai-Hokuriku area pass is ideal - 7 days of unlimited train rides across the Kansai- Hokuriku area at 16,000 yen when purchased outside of Japan. This pass would be sufficient to cover all areas in this itinerary. 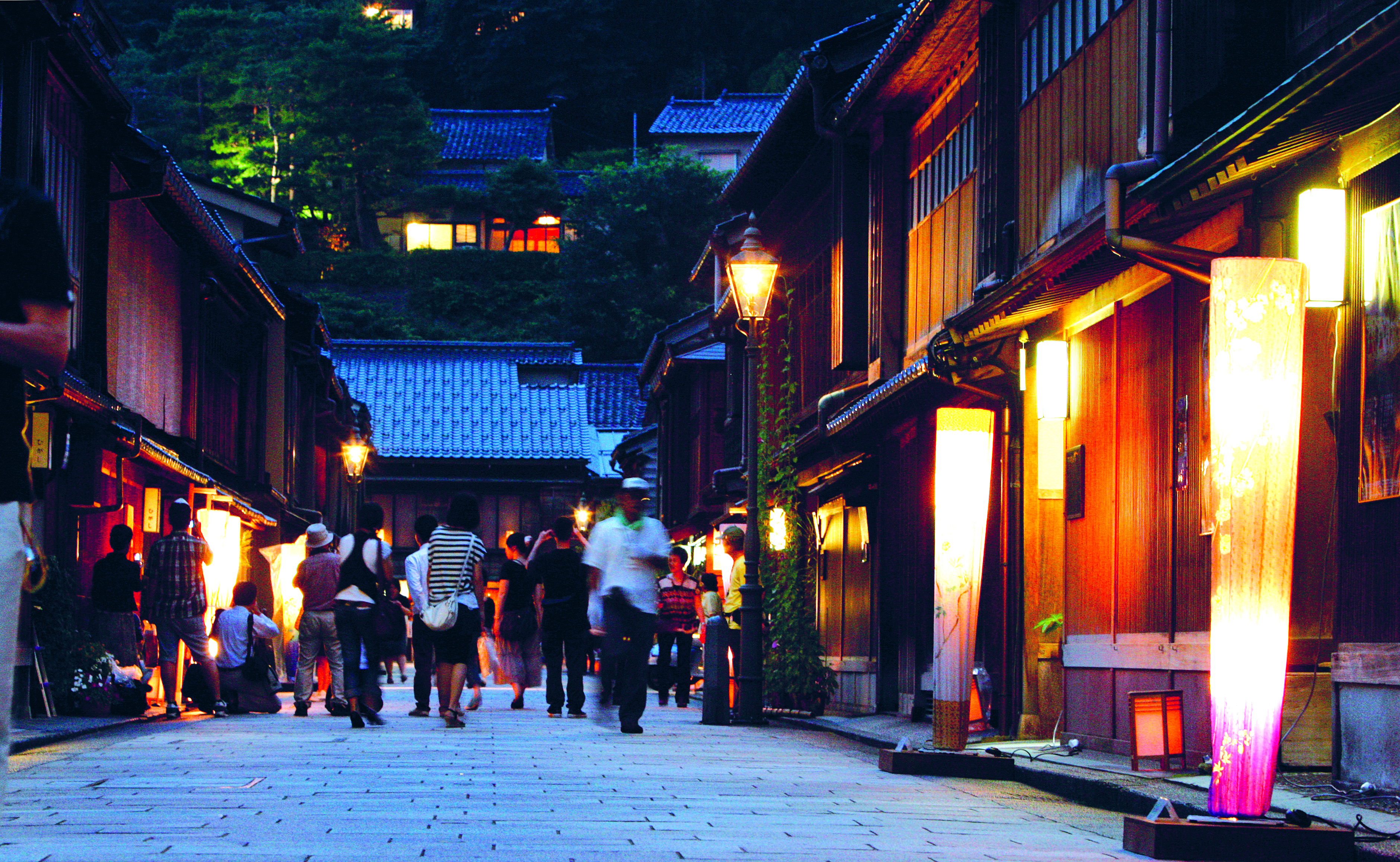 Well preserved for over 100 years, the Higashi Chaya district in Kanazawa sees rows of traditional Japanese buildings dating back to the Edo period. Known as the entertainment district in the past, these buildings were used by geishas to entertain and perform. Walking through this historic district, it is easy to picture yourself walking in the midst of past geishas on their way to their appointments.

Till this day, multiple teahouses occupy the buildings where tourists and visitors alike can experience tea ceremonies; sample a gold flake covered ice cream, a specialty of the district or if you are willing to pay, a night of artistic dance and musical performances by working geishas. A short bus ride away lays the impressive Kanazawa Castle and Kenrokuen gardens. Dating back to 1546, the castle was once the residence of feudal lords for 14 generations before serving as an army base in World War II and finally converted to a university campus. The gardens lie on the nearby grounds of the castle and were only opened to the public in 1874. Commonly regarded as one of Japan’s 3 most beautiful gardens, its name was built around the 6 attributes to a perfect garden. In the spring, cherry blossoms liter the gardens whilst green foliage follows in summer. Fall brings the bright contrast of colours that sets the garden ablaze and in the winter, the snow covers the treetops and fields with a blanket of pure white peacefulness. But no matter the season, the garden boasts visions of the perfect beauty of a Japanese garden, cared for with precision and skill.

Not only is traditional culture present in Kanazawa, but also a progressive spirit, with the 21st Century Museum of Contemporary Art, Kanazawa, that is a short walk away from the castle and gardens. Opened in 2004, it takes on the concept of a museum “open to the city” and features park-like grounds around the building. The museum houses modern and exhibits of local and international artists. 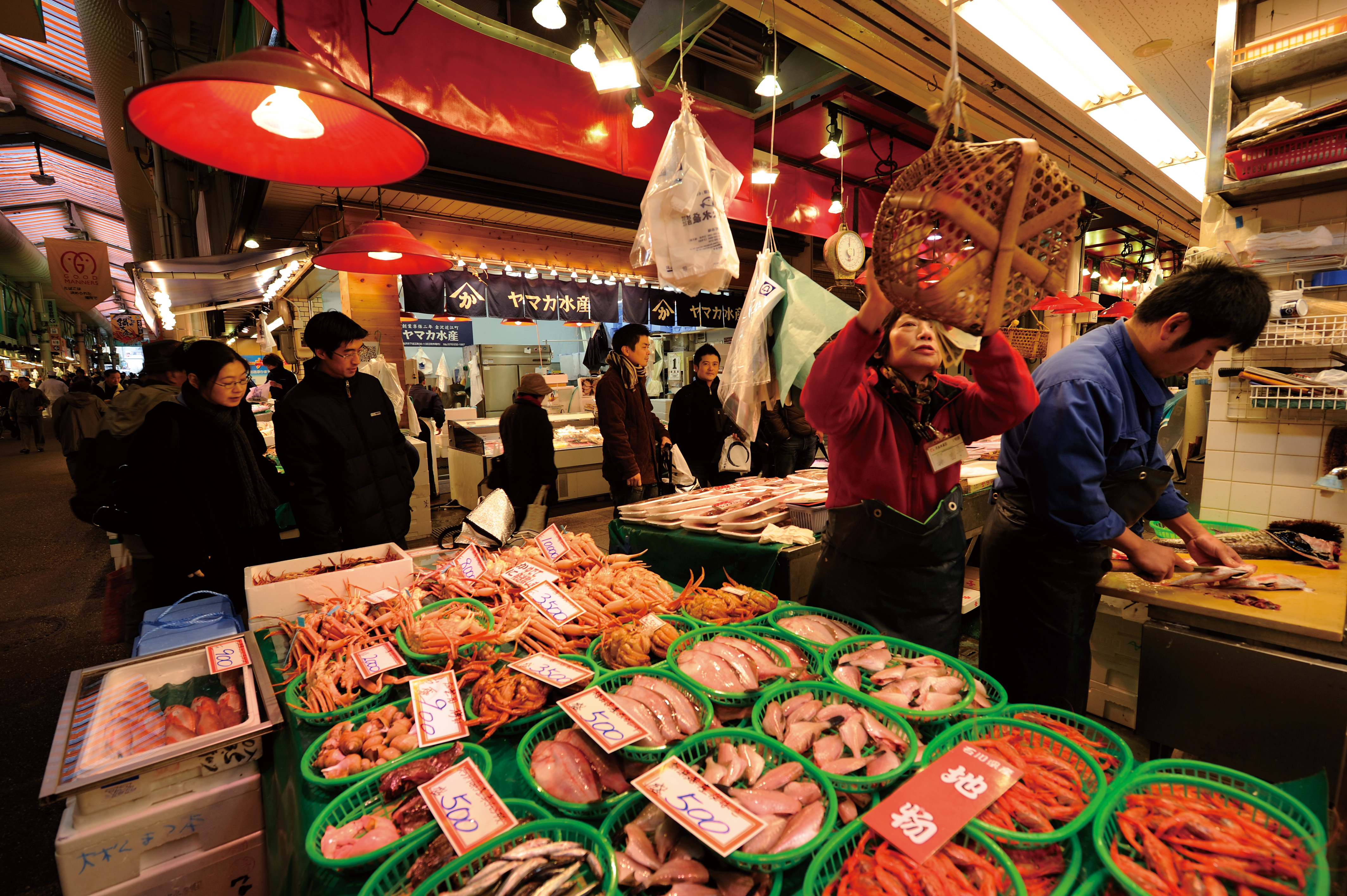 Shop for fresh produce at the Omi-Cho market

For those looking for the freshest produce and cuisine that Japan is known for, head to the Omi-Cho market, situated a mere 5 minutes bus ride from Kanazawa station. Established in the 18th century, this market has everything you could possibly want for. Locally grown and sourced produce like seafood, meat, fresh produce and even restaurants selling hot food and sashimi. Frequented by both tourists and locals, the Omi-Cho market is not to be missed.

The tea ceremony has such an importance in Japanese culture and traditions that no trip to Japan will be complete without participating in one. First popularized as an art form by Sen-no-Rikyu, the wabi cha tea ceremony is still widely practiced across the country. The Sakai Risho no Mori is a museum and cultural centre where visitors can not only learn about the history but also be part and experience a real tea ceremony for themselves. The museum is also partly dedicated to retelling the life of another Sakai historical figure, Yosano Akiko, the poet. 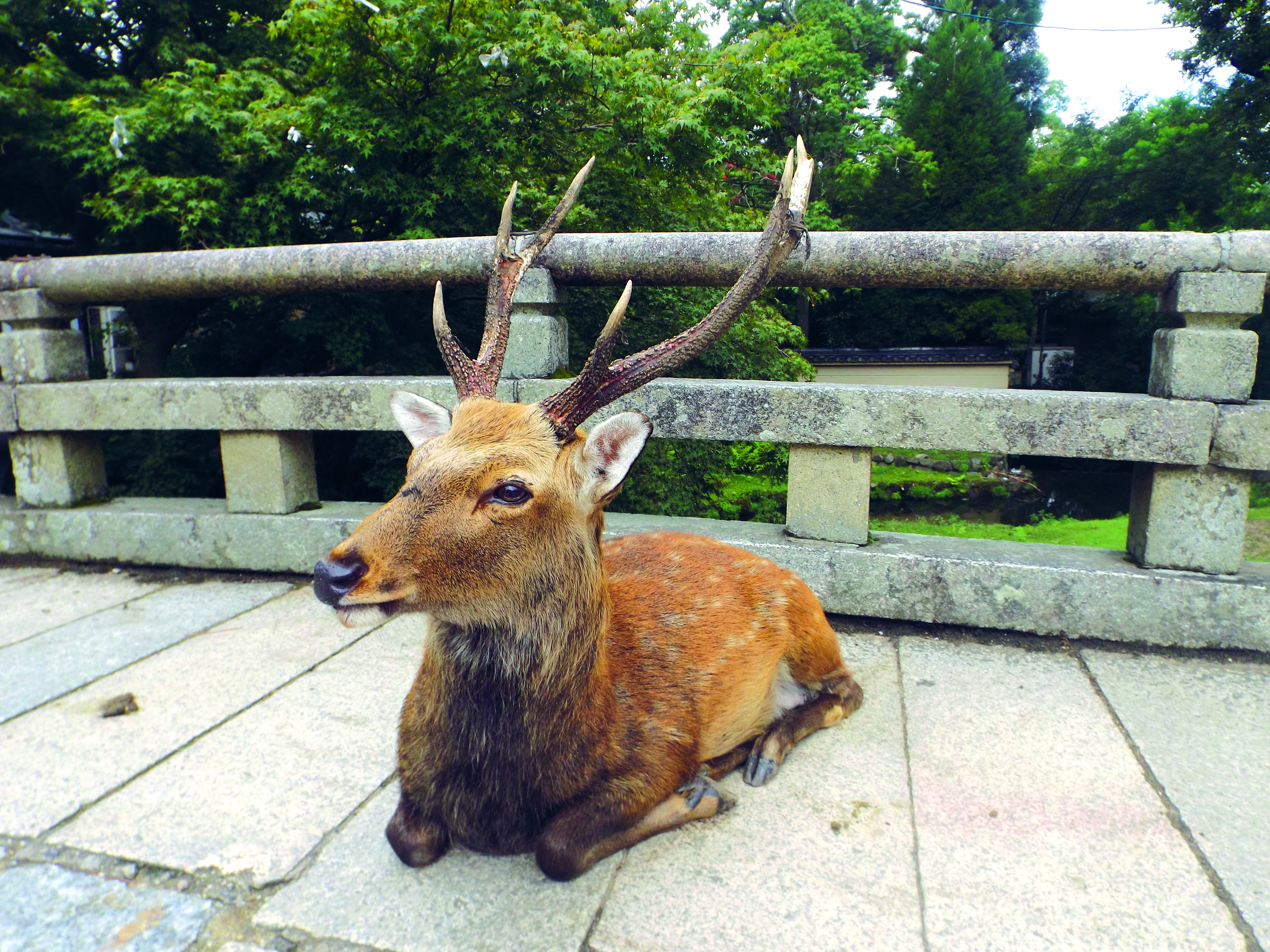 Deer are part of the attraction at Nara

Nestled in the centre of Nara is a large park home to almost 1400 free roaming deer. The deer was considered to be messengers of the Shinto gods and the Nara deer have certainly become a symbol for the city. Visitors from all over flock to Nara to watch the deer and the deer are certainly used to tourists gawking and taking photos around them. It provides such a uniquely wonderful experience to have a crowd of deer casually wondering past and around you or even sitting posing for closeups. Carts selling deer crackers are abundant all across the park but be careful, the relatively tame deer can sometimes become aggressive if they want food.

The park also home to the National Nara Museum as well as the Todai-ji temple, which is listed as a UNESCO world heritage site. The Todai-ji temple is one of the most historically significant temples in the country. Built in 752, it acted as the head of all provincial Buddhist temples in Japan. The main Buddha hall of the temple, Daibutsuden, is the world’s biggest wooden building despite it only being two thirds of its original size and it protects one of the largest bronze Buddha statue in Japan, sitting at 15 meters tall.

The Shiga prefecture is not only the home to the largest freshwater lake in Japan, Lake Biwa, but is also to Omi beef, a local delicacy that rivals the better known Kobe beef. Cooked on a volcano stone slate at the table, Omi beef is a type of Wagyu beef that originates from the Shiga prefecture. Rich and full of the famous Japanese white fat marbling, Omi beef is like no other, with a texture like butter it is no wonder the locals love it. 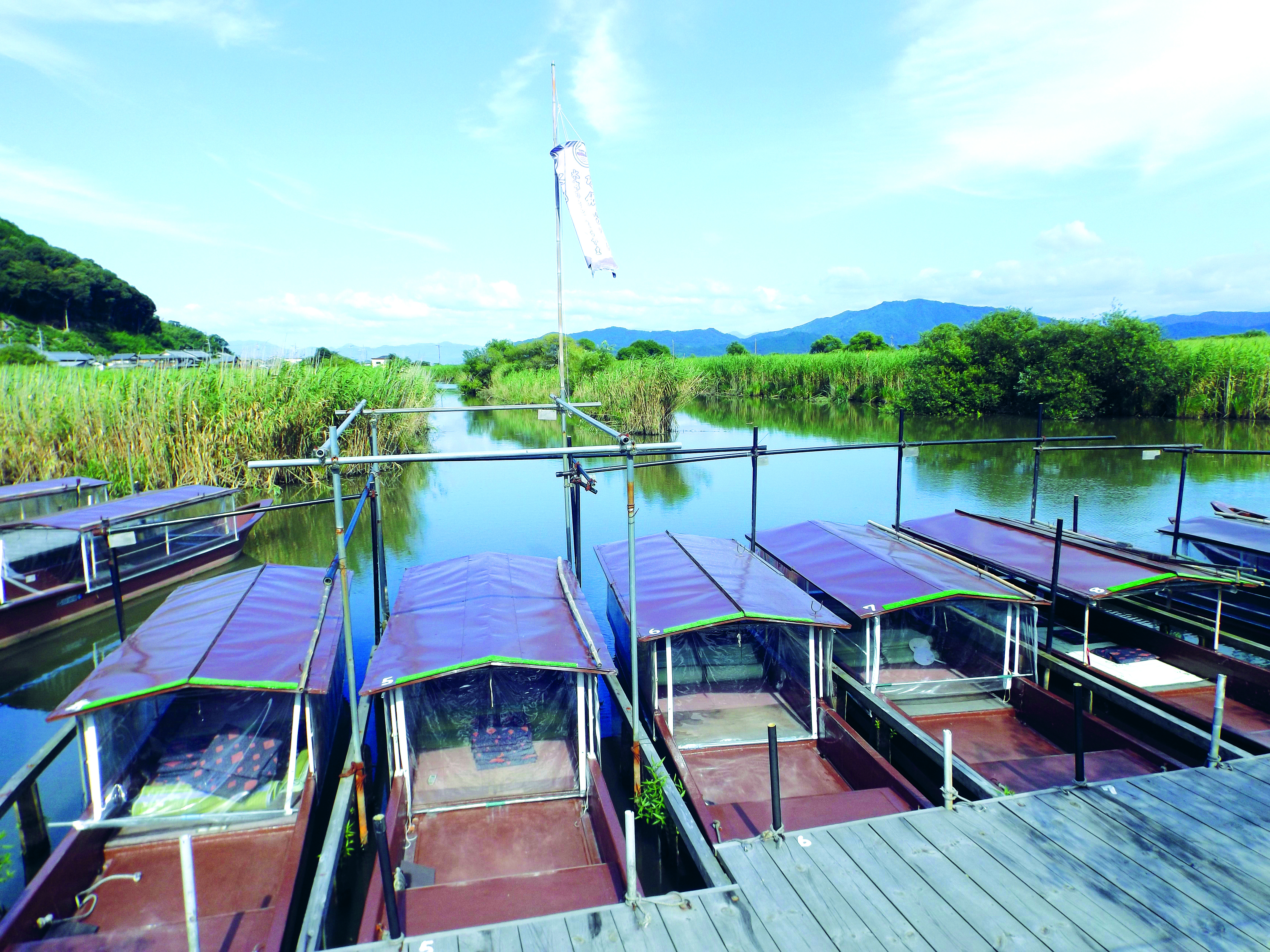 Suigo Meguri canal is one of the most historic

A short distance away is the Omihachiman town district where stone paved walkways and willow trees line the canals running through this historic merchants town. A tranquil atmosphere surrounds the many teahouses, dessert and souvenir shops that makes for a lovely stroll around the preserved Endo period architecture. Far from the bustling cities, enjoy a relaxing Suigo Meguri, canal boat ride, around Lake Biwa on the Suigo no Sato Maruyama tours where the serenity of the lake will lull you into a sense of calm and peace. Teeming with the sounds of wildlife, swaying reed beds and idyllic scenery, it is easy to forget your troubles and schedules and surrender yourself to an hour of happiness and bliss.

Once the imperial capital of Japan, it is no surprise that Kyoto has so much to offer. From cutting edge cuisine to the world famous geisha district of Gion, the city of Kyoto is a must see on your trip. As one of the most religiously well preserved cities in Japan, Kyoto oversees 400 Shinto shrines and one of the most popular amongst tourist is the Fushimi Inari Shrine, which was ranked the number 1 tourist spot in the country by foreign visitors. You will recognize its bright vermillion gates, which straddle networks of walking paths and trails across the site, as seen on countless instagram photos. The shrine is said to have over 10,000 torii gates that form tunnels of brilliant vermillion that are set against the background of lush green of the surrounding forest. As the most important Shinto shrine in South Kyoto, it is brimming with cultural importance that provides connections to ancient Kyoto. If you’re feeling adventurous, venture up the trails past the rows of bright torii gates and into the sacred Mount Inari, away from the clamor and camera shutters of tourists trying to get the perfect shot of those renowned gates. 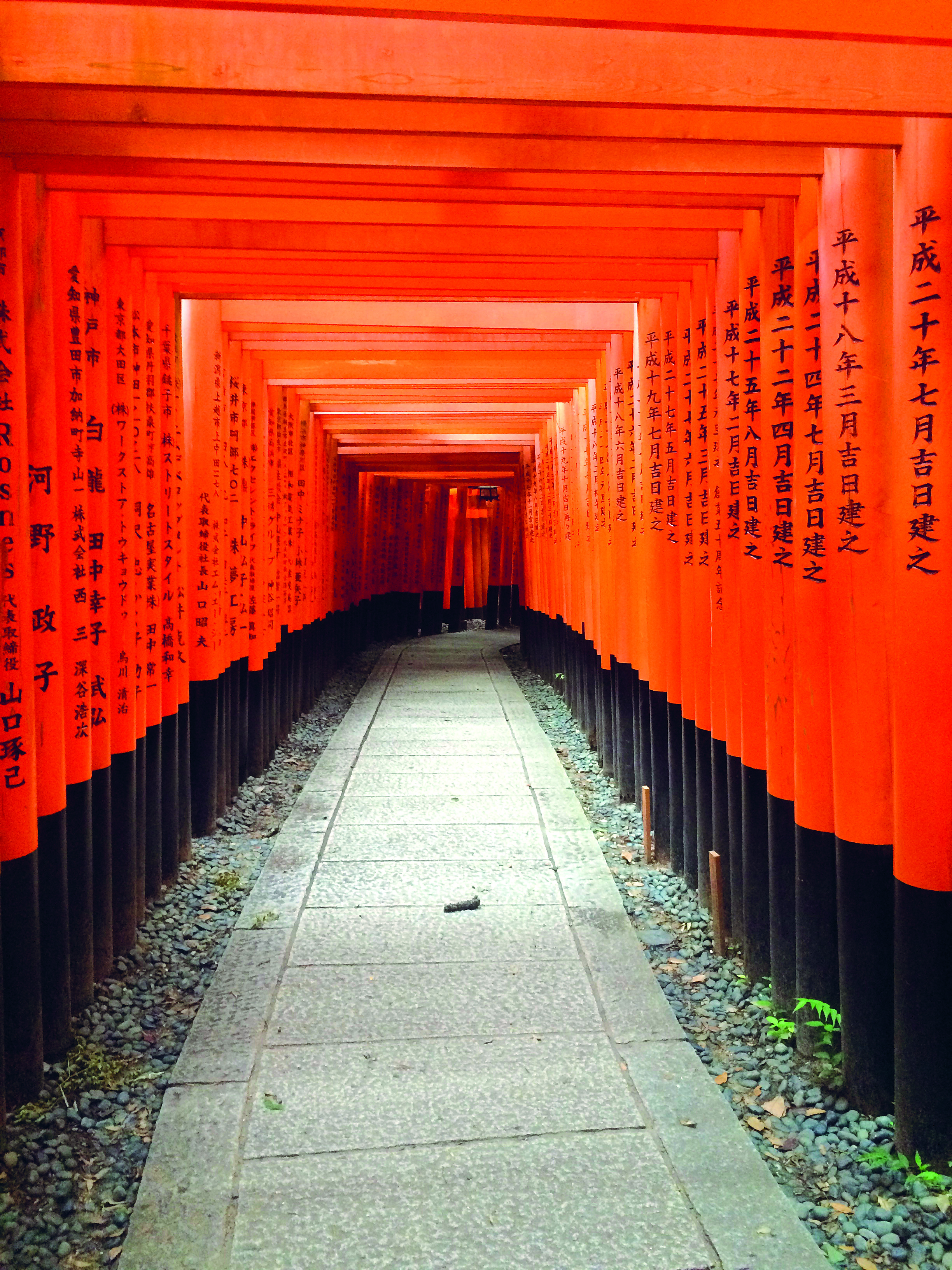 Fushimi Shrine - For a traditional Kyoto dining experience, head to the Hyo tei restaurant for their Asagayu breakfast set. In a back street on an affluent and modern neighborhood sits a deceptively traditional looking house. Inside, large glass windows that look out onto a Japanese garden surround you, creating a calm and peaceful hideaway. The main star of the Asagayu set is a thick porridge style dish named Okayu, with numerous small side dishes accompanying it. This is best experienced without the noise and clamor of other customers so arrive early in the morning before the main crowd descends.

The Byodoin Temple is a remarkable example of strong Jodo architecture, cultural importance and majestic beauty. Featured on the back of the Japanese ten-yen coin, the temple, and its main hall are a marvel, not to be missed. The Phoenix Hall, named for the two phoenix statues at either end of its roof, poses strong large wooden red doors covered in gold decal. Water surrounds the entire building, creating a floating illusion that matches the ethereal atmosphere of its grounds. Inside the hall, a single, large gold leaf covered statue of Amida resides as well as 52 wooden Bodhisattvas, which are on display in the temple’s museum, along with the temple’s other treasures. The temple and its nearby museum are truly the epitome of Japanese religious splendor and come highly recommended. 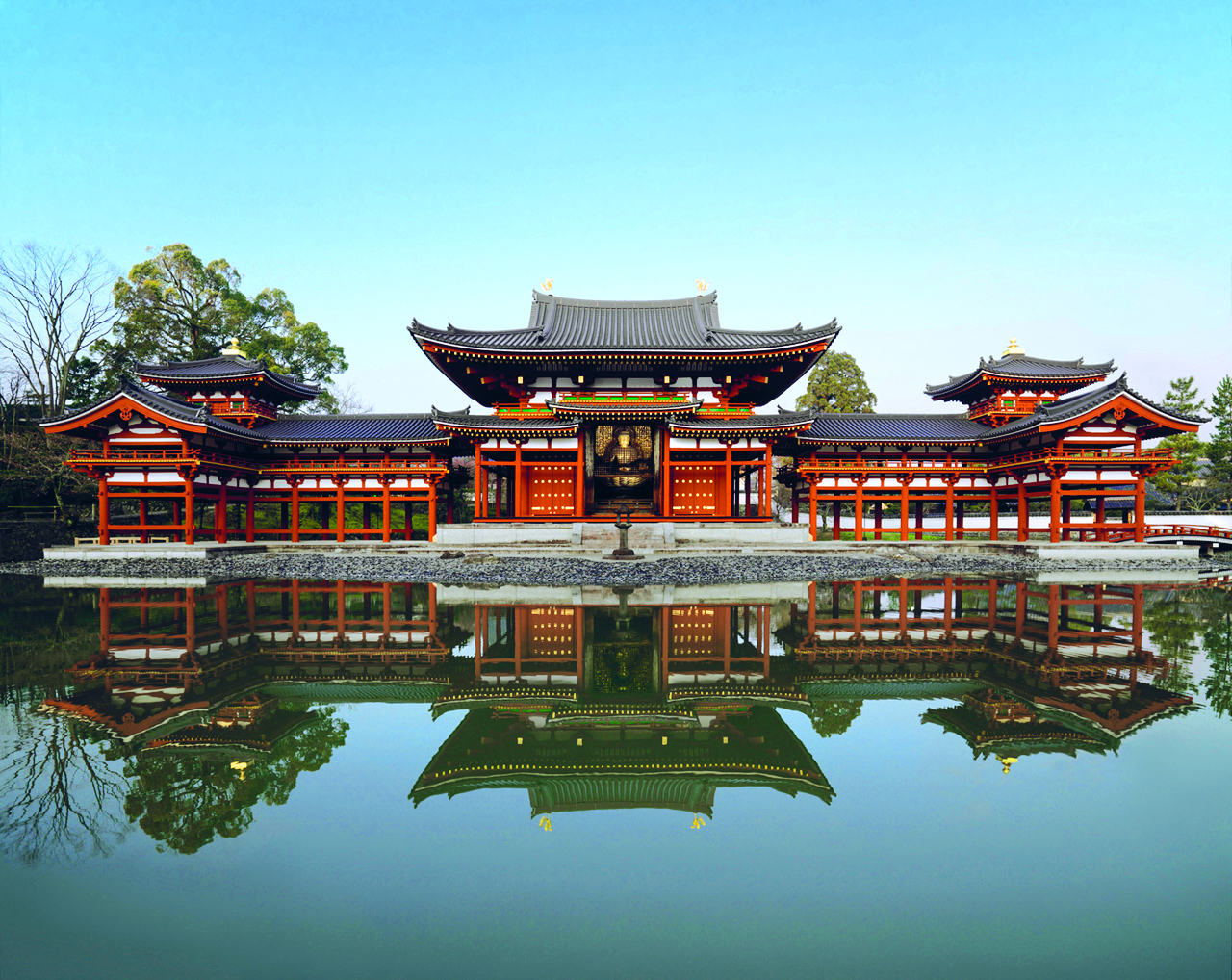 The Ujigami Shrine is believed to be the oldest standing shrine in the country. With no official records of its construction, many estimate its beginnings to start well before the year 1060. Built in the nagare-zukuri architectural style, the shrine is considered the “guardian shrine” of Byodoin temple. Registered as a UNESCO World Heritage Site, the Ujigami Shrine may be small, but for what it lacks in size, it certainly makes up for in history and culture.

As the second largest city in the country, Osaka is well known amongst the rest of the world. A break from the temples and shrines that dot the Kansai region, Osaka is a booming metropolis of technology, culture, food and excitement that Japanese cities seem to embody with ease. The Osaka City Station is proof of the modernization of the city. Steel beams and glass outline the contemporary building that function as a transport central from other parts of the country. With this, getting to and from Osaka is incredibly straightforward and simple. For anyone that likes a little retail therapy, Osaka has so much to offer. The Hankyu department store holds international and local luxury brands ranging from cosmetics, women’s wear, shoes and even a food hall serving Japanese and global cuisines and wines. Their window displays are of equal opulence, each designed by an international or local artist on a monthly basis. For those on a tighter budget, the Don Quijote discount store has almost any product imaginable from technology to socks and chocolate, where you can fill your basket till it overflows. 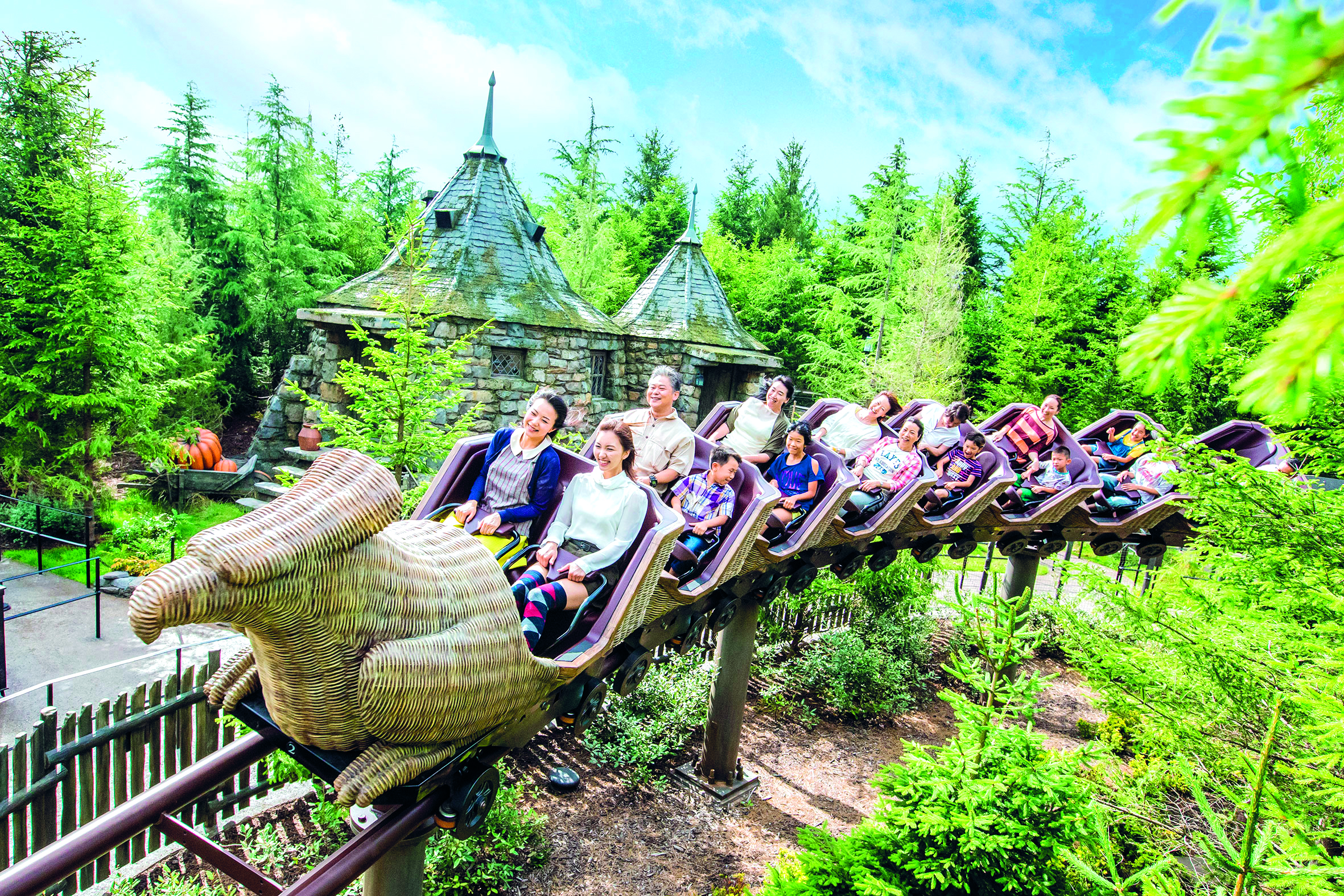 Osaka provides a perfect location for the next stop, Universal Studios Japan. Convenient to get to, it is no wonder that many families and thrill seekers are part of the millions of visitors that pass through the theme park’s gates each year. Additionally, it is the only Universal Studios in Asia to have the Wizarding World of Harry Potter, where visitors can step into the books and experience the snow capped village of Hogsmeade or the towering formidable castle that is Hogwarts. This attraction contains a multitude of shops and dinning options, all resembling those in the books and movies, as well as two rides. The rush of recognizing shop names or even holding a mug of Butterbeer would make any child or adult, giddy with excitement.