Tweet
From white beaches to emerald waters and dramatic rock formations, take a brief respite on some of Thailand’s most unforgettable islands.
By: David Bowden

While there are several main tourist islands in Thailand (in Thai, islands are called koh or ko), when all the specks of land surrounded by water are added up; there are hundreds of Thai Islands. Many travellers became aware of the dramatic beauty of maritime Thailand when Khao Phing Kan formed the backdrop to the 1974 James Bond movie The Man with the Golden Gun. Moviegoers were captivated by the island’s limestone tower karst topography situated in Phang Nga Bay to the northeast of Phuket.

Excited by what they saw, travellers flocked to Thailand to discover that there were many more dreamy islands to explore along the 3,000km-long Thai coastline. They are not uniquely Thailand - karst geological formations are found in many other parts of the world - but Thailand is endowed with some of the finest. 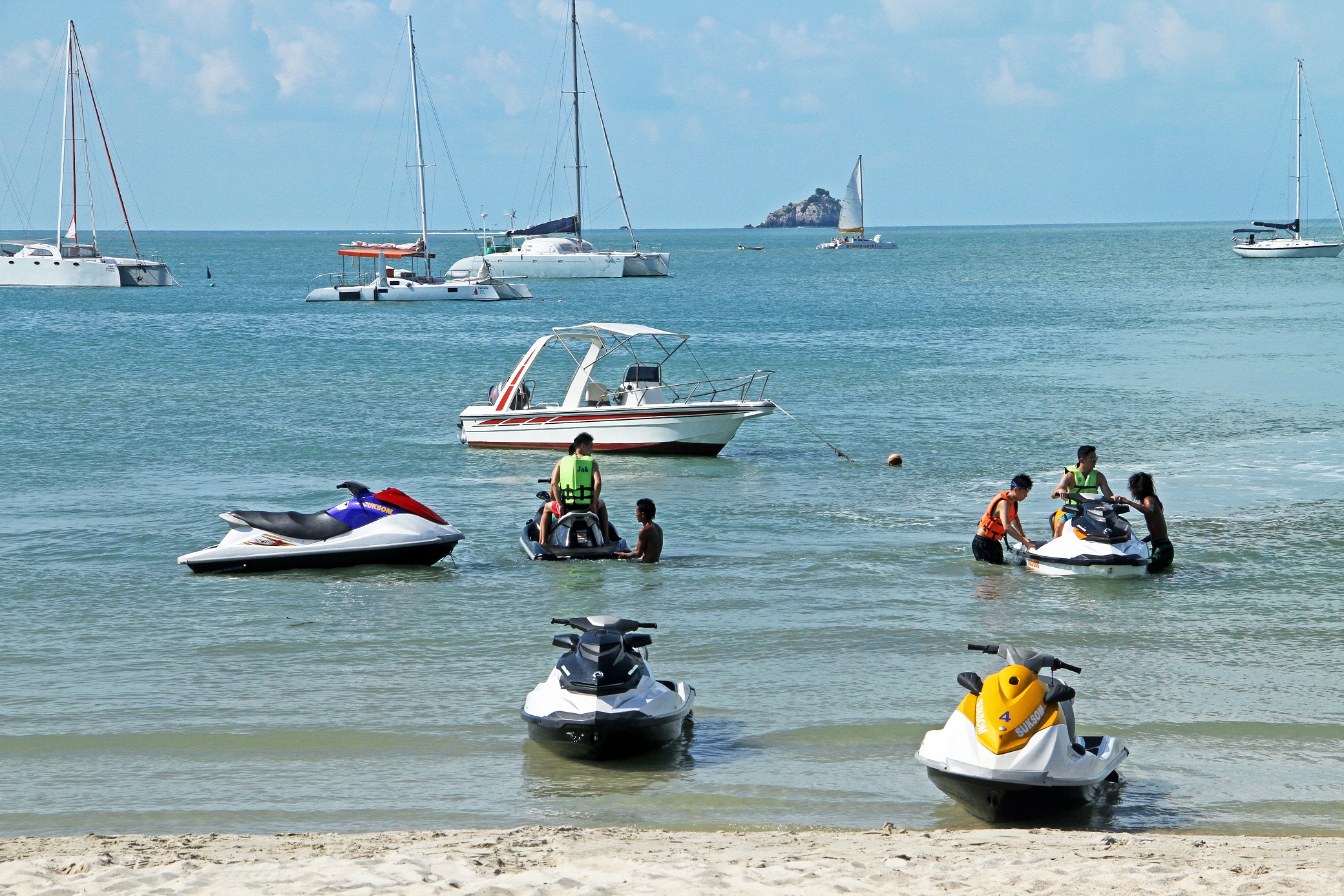 Karst topography develops on limestone rocks and is characterised by steep cliffs, rounded hills, caves, suspended lakes and semi-hidden backwaters called hongs. The rocks are blanketed by distinctive vegetation that can survive in the thin layer of soil that forms on limestone rocks.

While the islands of Phuket and Samui are well known to global travellers, lesser known islands such as Chang, Samet, Bulon, Muk, Racha Yai and Kut remain as paradises yet to be fully discovered. Backpackers of the ‘60s and ‘70s pioneered travel to Thailand and while they still flock here, especially to the less visited islands, Thailand is now an established travel destination with many luxurious resorts on its most popular islands.

Thailand’s finest resorts feature signature restaurants and spas while the less visited islands offer comfortable but basic accommodation and infrastructure; at least for the time being. Things change quickly in Thailand and some of the isolated islands of a decade or so ago are now well and truly on the tourist map.

A whole range of leisure activities are available both on the land and the adjoining waters. While these differ from island to island, visitors can participate in sailing, diving, snorkelling, whitewater rafting, elephant riding, kayaking, rock climbing and golf. Here’s the latest on several Thai Islands spanning the Andaman Sea and the Gulf of Thailand. 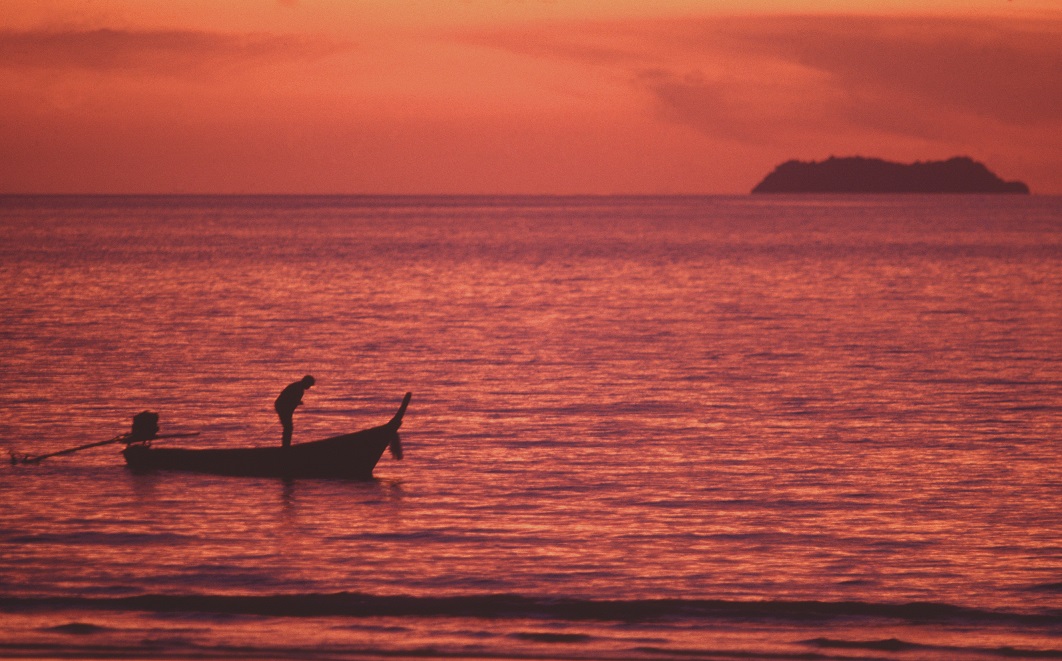 Fishing at Sunset in Koh Lanta

Krabi’s dramatic limestone cliffs, golden sand beaches, offshore islands and international airport ensure that Krabi receives a growing number of sun-seekers. Krabi is on the mainland and while the riverine town has an interesting market, most tourists head to the beaches of Ao Nang and Railay and from here, fan off to several offshore islands such as Phi Phi, Hong and Lanta.

Railay has the best beaches while Ao Nang is a well-established tourist beach with restaurants, bars, resorts and facilities like ATMs, travel agents, rock climbing schools, ticket offices for ferries and a flotilla of long-tail boats to transport day visitors to various near-deserted offshore islands. 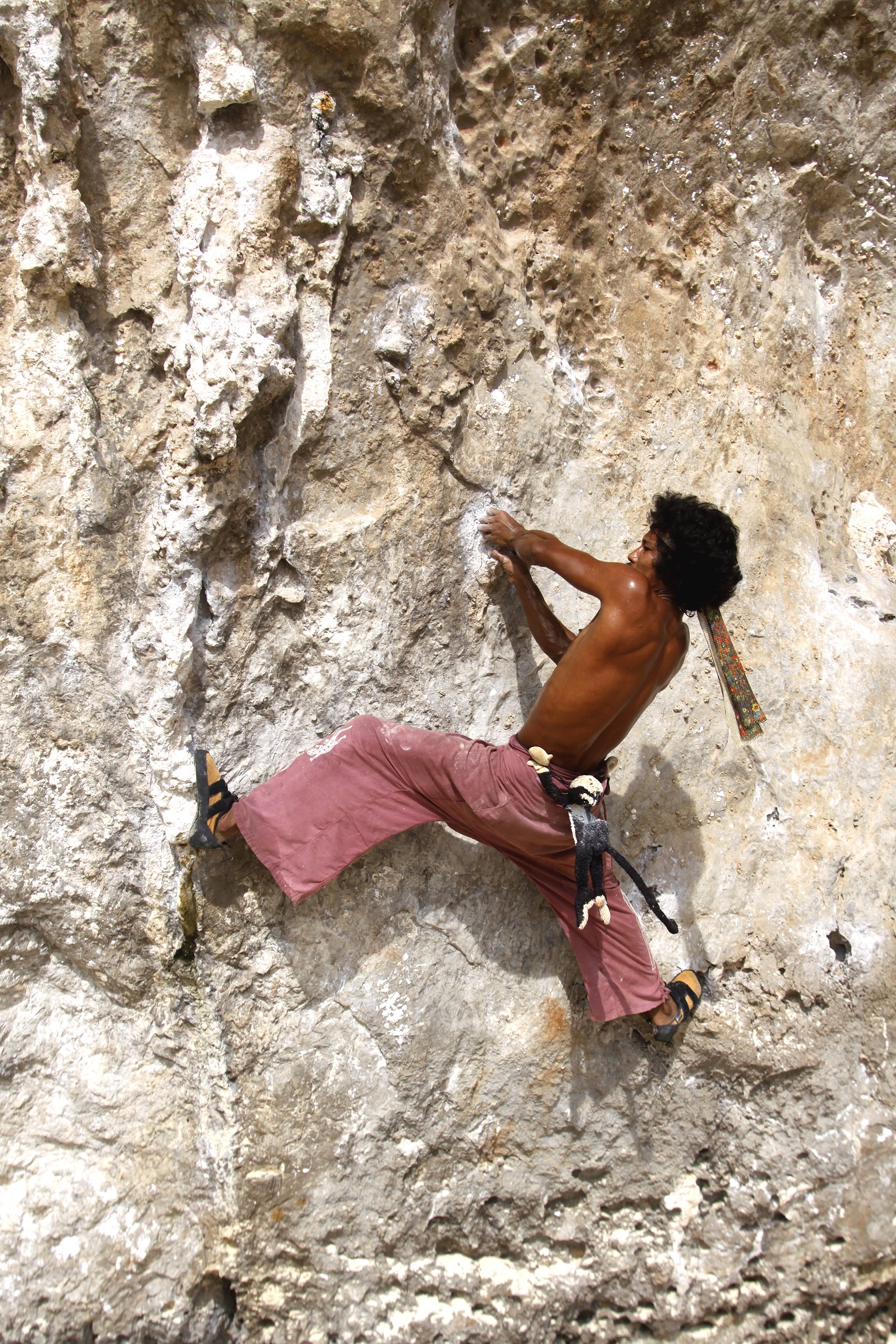 While there are ferries to Koh Lanta, many visitors are driven from Krabi to the 340km2 island via the passenger or car ferry into Ban Sala Dan. Most resorts are situated on a thin strip of coastal development along the west coast, although there is a road across the island and down the east coast. While the development over the past two decades has been rapid, Lanta still retains a laid back island ambiance. Ao Kantiang is one of the island’s most picturesque beaches with Pimalai Resort and Spa occupying the finest hillside location over the Indian Ocean.

Fly direct to Krabi Airport, which is the base for domestic flights and a handful of international flights, including those direct from Singapore and Kuala Lumpur. 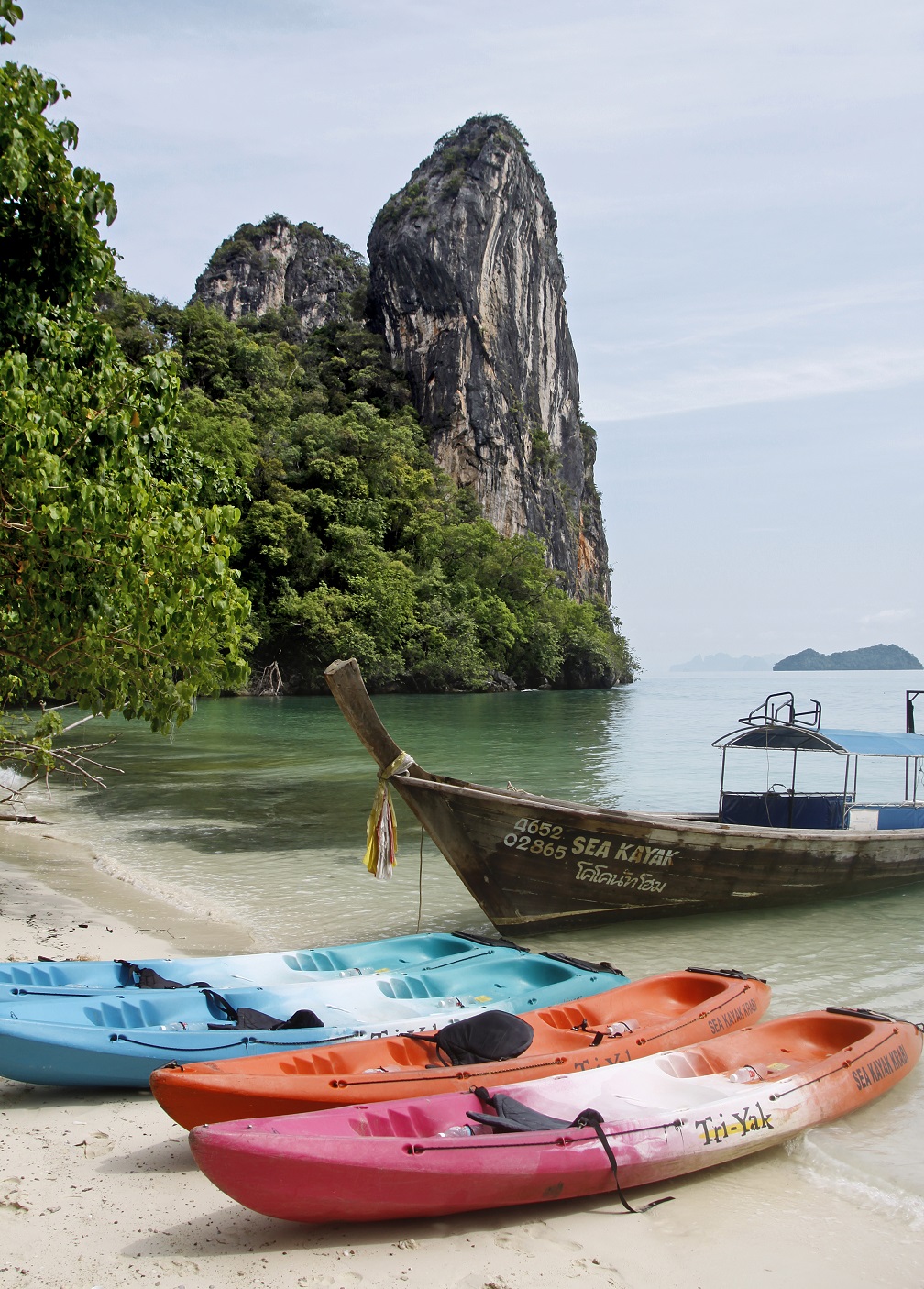 Phuket is Thailand’s largest island (543km2) and best known with global travellers who fly direct to the international airport from many parts of the globe. Its main beaches are situated on the western seaboard with the most popular and crowded beaches being Patong and Karon. There are other secluded bays and coves such as Kamala, Nai Yang and Nai Harn to escape to for solitude in the sun.

Diving in remote islands such as the Similan and Surin island chains is a rite of passage for global divers, while those with a passing interest will find many other opportunities in waters surrounding Phuket.

It’s easy to get blinded by the sand glare along Patong Beach but Phuket has many faces including old Phuket which is best seen in Phuket Town. Head to Soi Romanee and check out the old restored Chinese shoplots. Alternatively, head to Jungceylon Shopping Mall and Central Festival Phuket, which are two of several malls on the island. Explore the interior rainforests and plantations along dirt trails on all terrain vehicles. Along a similar vein, Xtrem Adventures offers an action-packed treetop adventure in the forests of Phuket. Zip, slide, glide and jump your way through the rainforest canopy along an elevated course that weaves its way through a former rubber plantation. The Phuket Thai Cookery School shows budding masterchefs how to make several iconic Thai dishes during their hands-on cooking classes.

The international airport connects Phuket to several domestic destinations in the country but more importantly, many international carriers fly to many parts of the world direct to the island. As such, Phuket is a gateway to many other destinations on the mainland and islands scattered in the Andaman Sea. 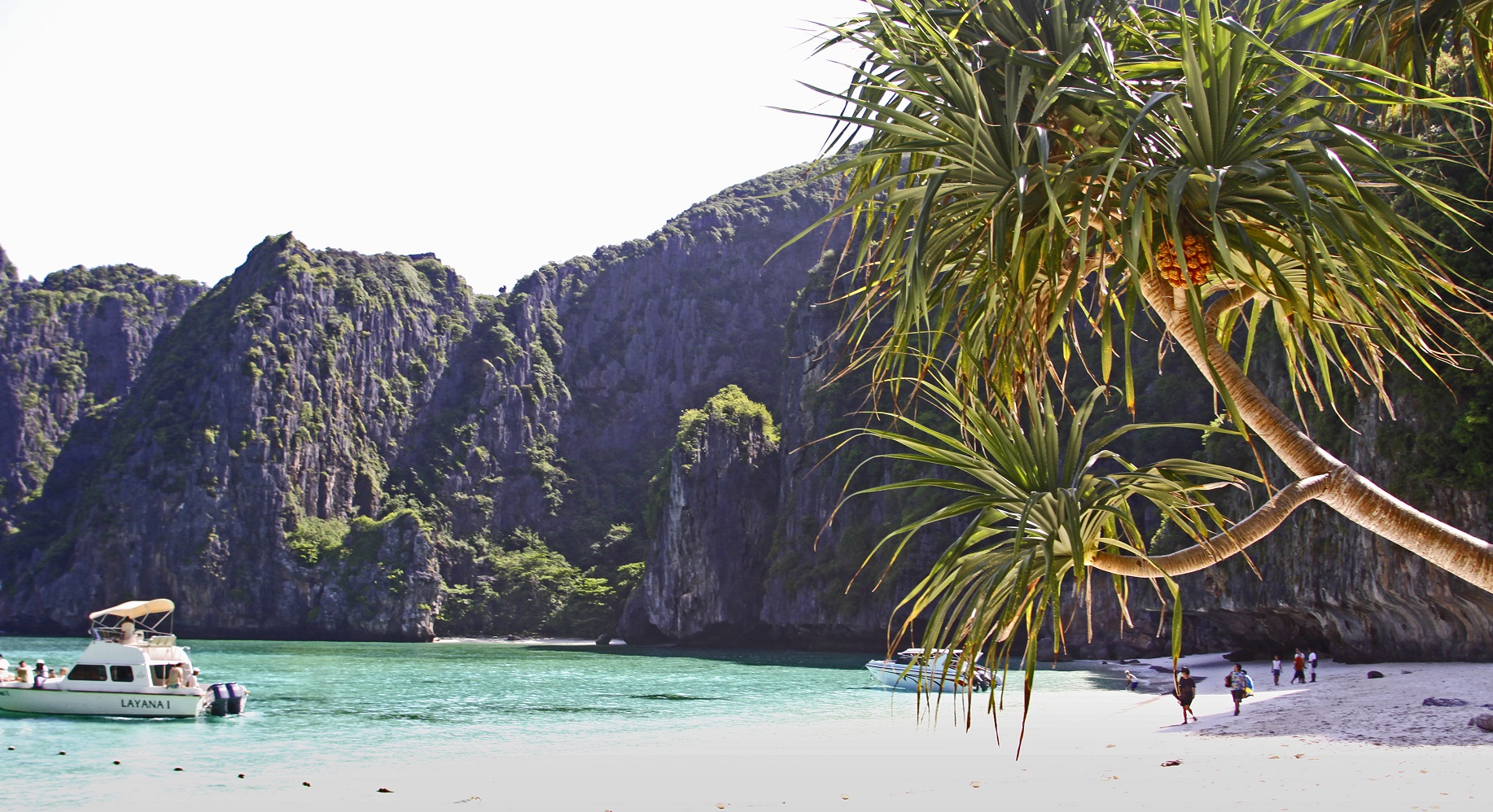 This small island group of just 12km2 is located in the Andaman Sea between Phuket and Krabi. Ao Maya Beach on Koh Phi Phi Ley is arguably one of the world’s finest beaches. White sands meet turquoise waters and its scenic beauty didn’t escape the attention of the producers of the Hollywood movie, The Beach, which was partly filmed here. While the island is surrounded by towering limestone cliffs, the beach has been well and truly discovered by those seeking paradise.

The neighbouring island and larger island of Koh Phi Phi Don is where the resorts are located and a famous viewpoint provides dramatic views of beaches such as Ao Ton Sai and Ao Lo Dalam. The port area of Ao Ton Sai is densely populated with the usual assortment of tourist facilities, which appeal to some while those seeking quieter retreats need to travel by boat to more tranquil locations. Watersports, snorkelling, dining, resort lounging and relaxed dinners and drinks by the beach are what attract tourists.

Phi Phi Islands are accessible by boats and ferries from Phuket, Krabi and Lanta. 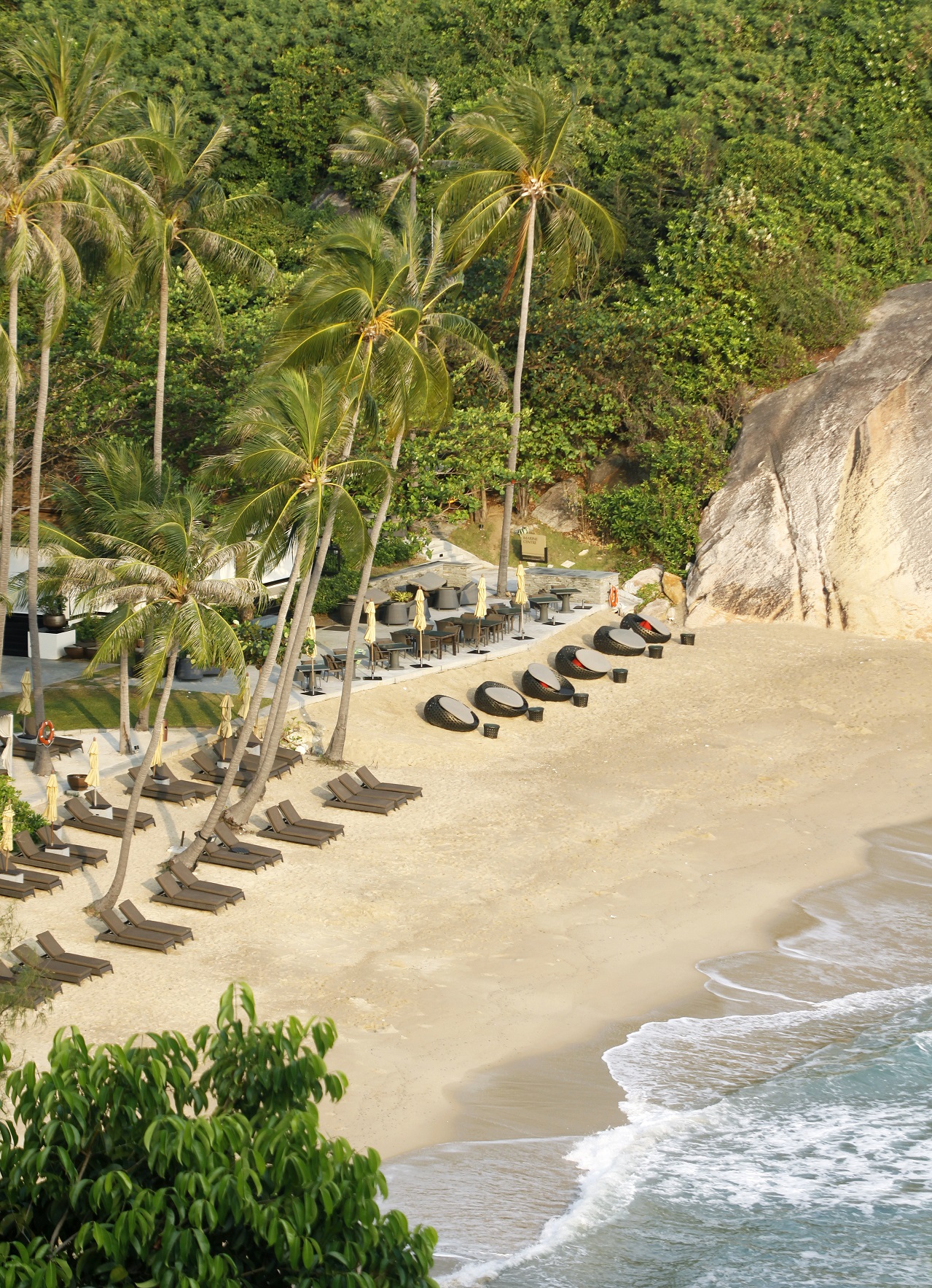 The most prominent tourist island group in the Gulf of Thailand is the 247km2 Samui, which includes the main island and surrounding ones like Phangan and Tao. Samui appeals because of direct flights and that its natural beauty is still basically intact. While resorts cling to the sandy coastal fringe, the hilly interior is still mostly carpeted in natural vegetation, including tens of thousands of swaying coconut palms. Samui appeals to those seeking a laidback holiday and many love it so much that they return time and time again.

The main beaches of Chaweng and Lamai are located on the east coast and the roads parallel with the beaches here are lined with bars, restaurants, cafés, shops and shop-front spas, while an extensive menu of services are available along the beaches, from snacks and cool drinks to massages.

Big Buddha (Wat Phra Yai) at Hat Bangrak is perched 12m high on top of a small island connected to the mainland. Temple-goers should also visit the ornate Wat Plai Laem and Kho Hua Jook with its picturesque views of Chaweng Beach. At dusk, the adjoining Sunset Bar has the best location for admiring kaleidoscopic sunsets.

Golfers all want to play at one of the region’s finest island courses at Santiburi Samui Golf and Country Club. There are a few shopping centres (The Wharf Bophut Shopping Mall and Central Festival Samui), as well as the usual assortment of boutiques, massage centres and, bars and restaurants, especially at Chaweng, Lamai and Bophut. 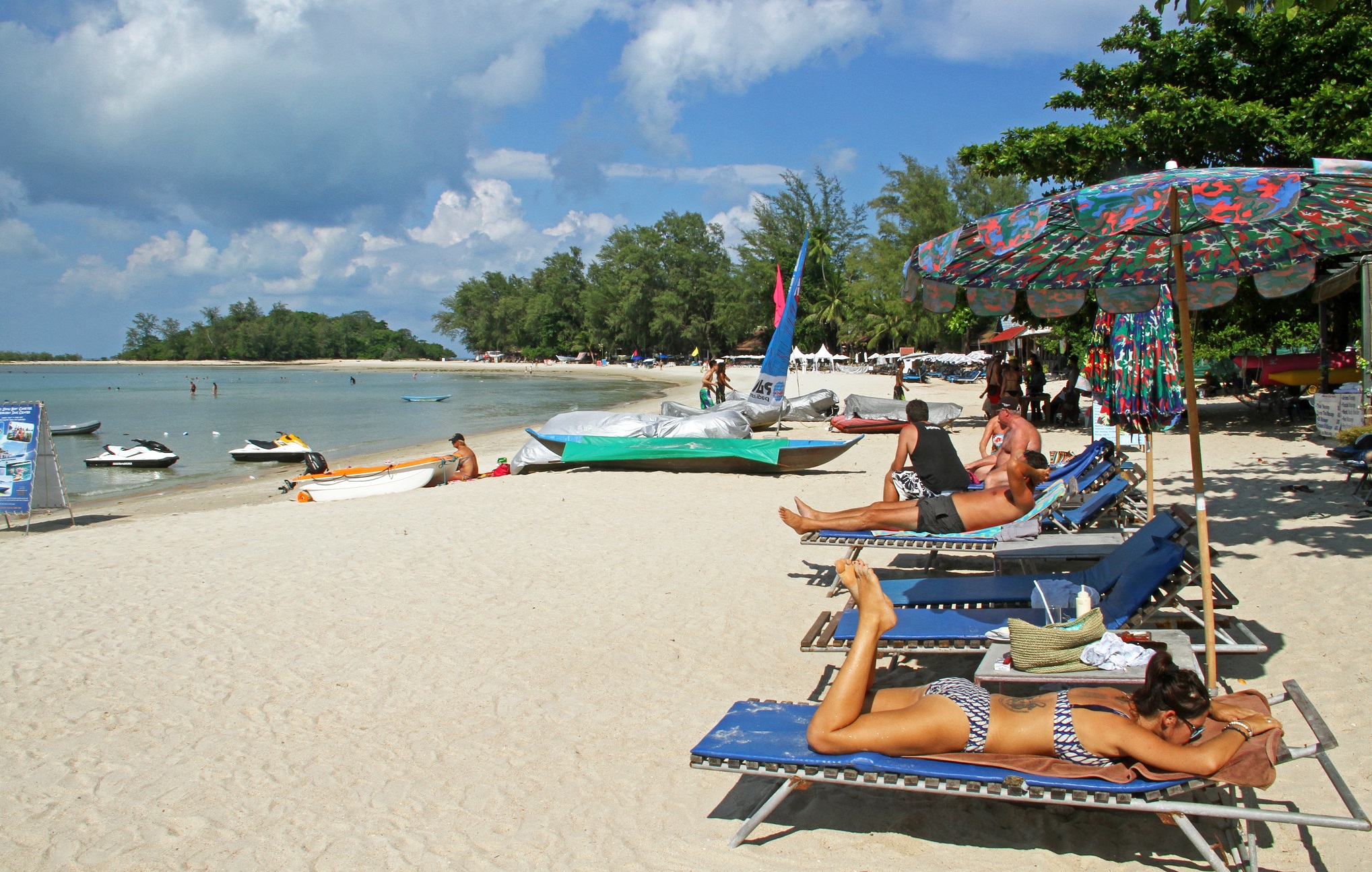 Koh Phangan, known as ‘Full Moon Island’, is still best known for its full moon parties, which attract many young travellers. Despite being much tamer than it was in the past, the parties still manage to lure adventurous backpackers.

There are several dive sites around both islands as well as neighbouring Koh Tao and Ang Thong Marine National Park. Kayaking around the limestone crags is another popular activity in the park.

Koh Samui is well served by domestic and international flights into the small privately owned airport. Bangkok Airways, with flights including those from Bangkok, Kuala Lumpur and Singapore, is the main operator. 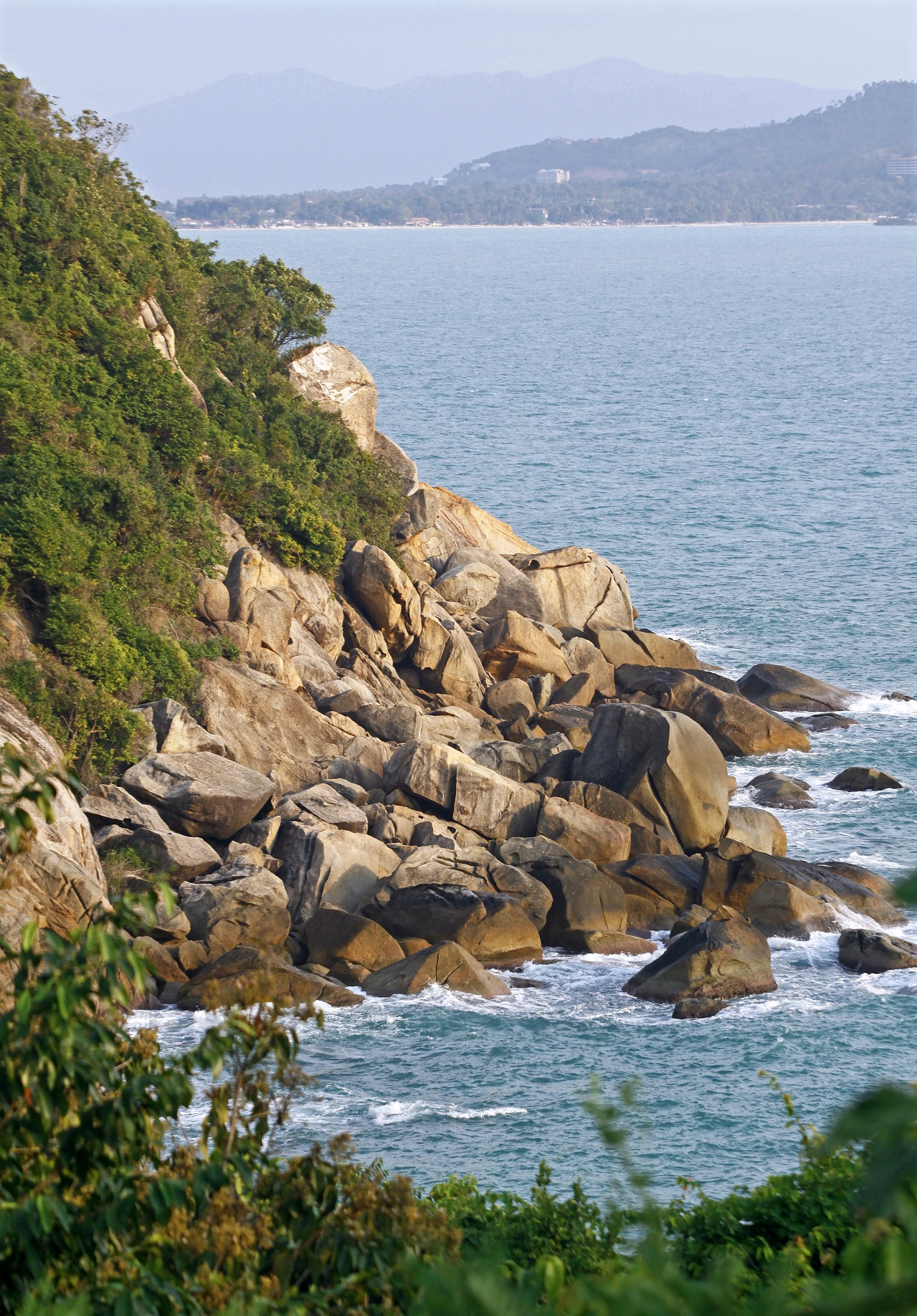 Trang in southern Thailand is the base for exploring several islands in the southern Andaman Sea. There is a small airport with flights from Bangkok and trains from the capital and the north terminate from here too and the islands of Hai (or Ngai), Muk (or Mook), Kradan, Libong and others are accessible from the small coastal village of Hat Pak Meng. These islands haven’t been fully discovered yet but there are small resorts on most islands. 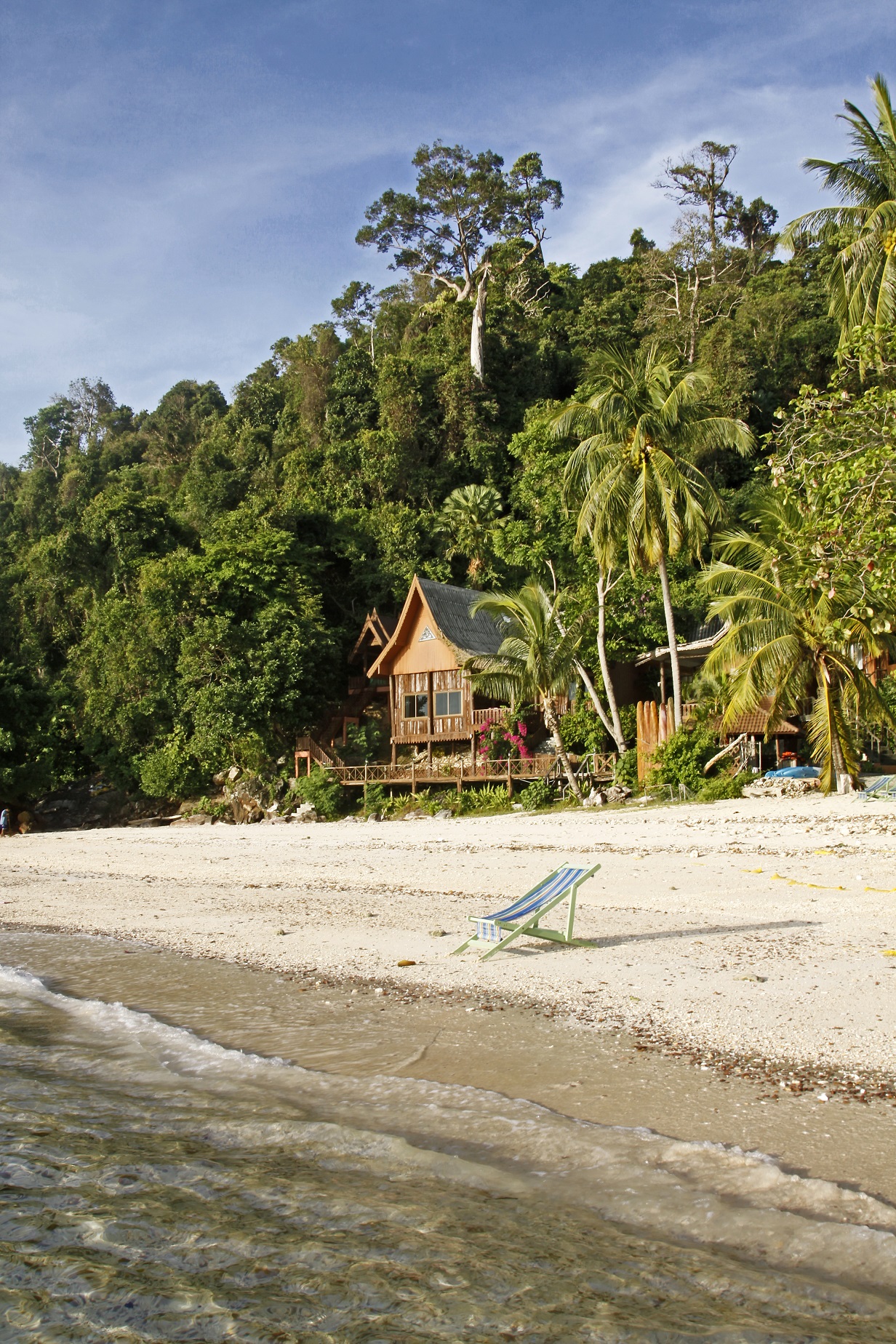 Koh Muk is home to the dazzling Emerald Cave, which is a steep-sided opening accessed via a dark sea canal. Once inside, the light is almost iridescent and glistens like a prized gemstone. Jumping into the water and being washed through the cave into this little patch of paradise is half the fun. 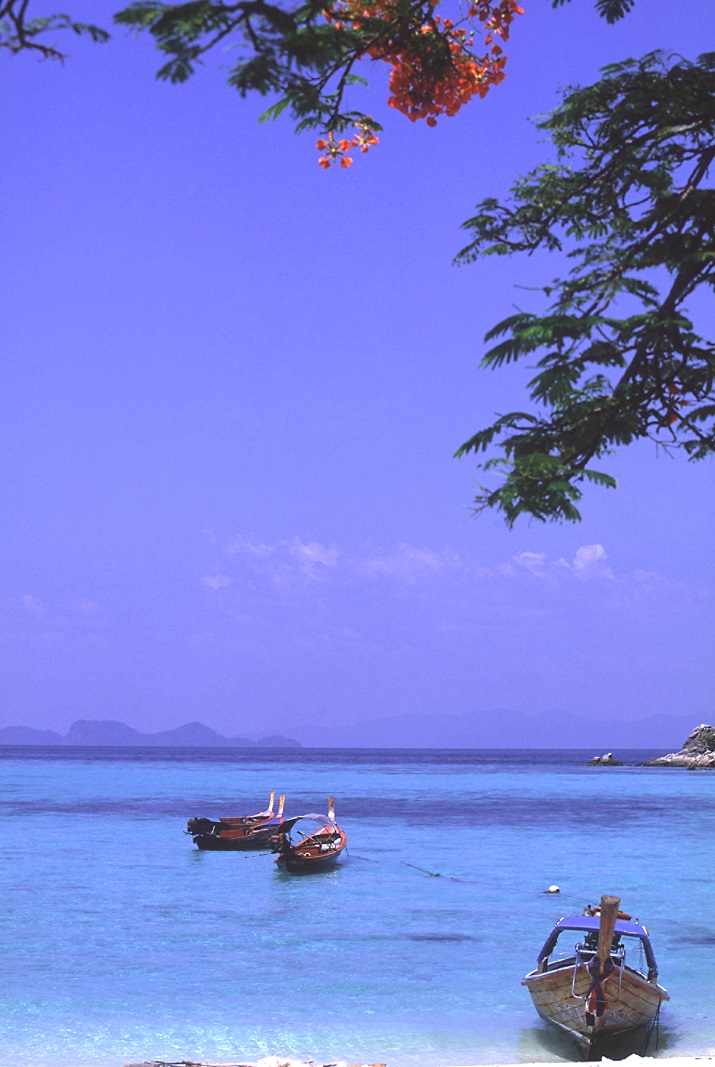 Located in Satun Province, the 50 islands in and near the 1,500km2 Koh Tarutao Marine National Park are capturing the attention of intrepid travellers. Best accessed during the dry season (November to May), the main tourist islands are Lipe and Adang with boats departing from the mainland port of Pak Bara (there are also connections to the Malaysian island of Langkawi from October to May).

Sea gypsies have lived in the area for centuries but now, they share the beautiful beaches and emerald water with tourists seeking an isolated paradise. Beaches on Lipe, such as Sunset and Pattaya (not to be confused with the larger tourist destination southeast of Bangkok) are now lined by mostly low-key chalet and bungalow accommodation. Tarutao is a place to truly relax as there are few attractions apart from snorkeling and diving.

The main islands of Phuket and Samui have international airports with direct flights to and from Singapore, Kuala Lumpur and Bangkok.

A network of ferries plies Thai waters to connect smaller islands to airports on the mainland. There are many ways to sightsee around the islands, including tuk tuks (covered motorbikes), songthaew (covered utility vehicle), taxis and motorbike hire. Exercise caution on motorbikes as most tourist accidents in Thailand involve motorbikes.

The southwest monsoon brings rain from June to October while the northeast monsoon affects parts of the country from November to January (the wettest period). February to May is the best time to visit although Thailand is a year-round destination.

CALLING CODE
To call Thailand, the country code is 66.

VISA
Singaporeans and Malaysians do not require a visa for visiting Thailand. Visitors who travel overland from a neighbouring country receive 15-day visas while those arriving in international airports receive 30-day visas.